The Collegiate Adventures of Abbey

I have spent all day today thinking, "I'm in college."
This may seem silly, since I have been in college since August, but it never fully hit me until I left campus this weekend to visit family that I am in college. I'm really doing it! I'm going to classes five times a week. I am living on my own (well... not exactly on my own: I have two roommates). I'm making friends! I have made friends. It hasn't even been three months yet, but I have made friends whom I love very, very much. Sometimes it is hard to remember that I have only been at school for eleven weeks. It's funny, the good that can come from being thrown together with a bunch of random people.

Last time on Updates From Abbey... 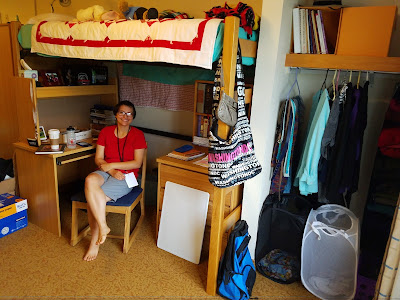 I moved into my room, met my roommates, and started my classes.

My roommates and I are still getting along swimmingly. God blessed us when he put us three together.

﻿ I have tried several new things since coming to college, including swing dancing and participating on a flag football team!

Swing dancing is fun, though I am not too good at it. The guy who taught me kept saying, "I'm not going to drop you. Don't worry." When he dipped me, the elder generation would have been proud, for I kept my posture stiff as a board. Of course, that is not really the proper posture when one is dancing.

The same guy who taught me how to swing dance also signed me (and everyone else in our brother-sister hall) up for his flag football team. Most of us showed up for the first game. Our team consisted of three people who knew how to play and four or five people who had never even heard of a football before. Our valiant captain gave us stellar instructions: "Okay, we're running that way!"
Our team of cheerleaders supported us with chants of encouragement: "A for Average! M for Mediocre! L for LOSER!"
We lost our first two games. Our team name was the "Average Joes," so we weren't setting the bar very high to begin with.
At every subsequent game we lost players until there were not enough of us to play any more, and the other team had to lend us two of their own players. We won that game.
There hasn't been mention of the "Average Joes" since then. That was over a month ago. 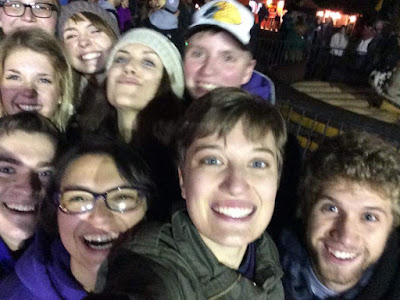 Another new experience was going to a haunted hayride. I was worried about being terrified to tears, but I actually had a lot of fun! The group I went with was really sassy to the actors dressed in scary costumes. I didn't get (too) scared because I spent most of the time laughing at everyone's commentary! My favorite was when a monkey jumped on the hayride and someone in the group said, "Oh, I loved your work in Planet of the Apes!" 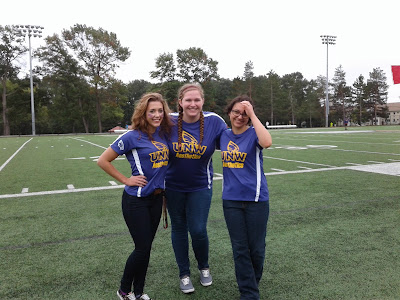 I am a part of the Women's Chorale at school. Our first "concert" was singing the National Anthem with the Men's Chorus at the homecoming game (which we won, by the way!). It's so much fun to sing in choir! Right now, we are preparing for our winter concert, which should be very impressive. 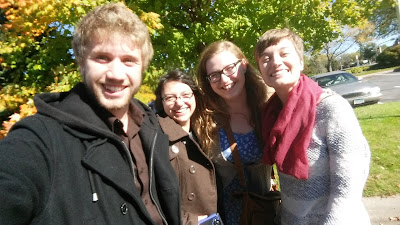 Though the picture is slightly blurry, this is my favorite picture of my main group of friends. This was a few weeks ago when we dressed up in our Sunday best and went to St. Mary's Basilica for church. My friend (and roommate) Sarah is majoring in Intercultural Studies and must visit different denominations for projects. Since Joseph is the only one in our group with a car, he chauffeurs us around to church and to the store. I have yet to find a home church. 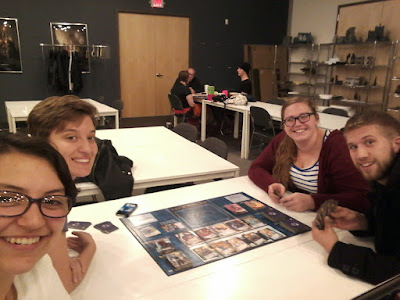 There is a board game store very near to school. They have a lending library of board games that you can take to a table and play, which is SO exciting! I'm so glad that my friends like to play board games, too! 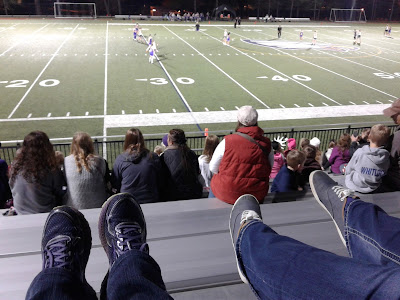 I have been to more sporting matches in the past few weeks than I have in my entire life. One of my roommates is on the women's lacrosse team, so Sarah and I went to support her at her first scrimmage. Not to brag, but we burnt our opposition to a crisp. 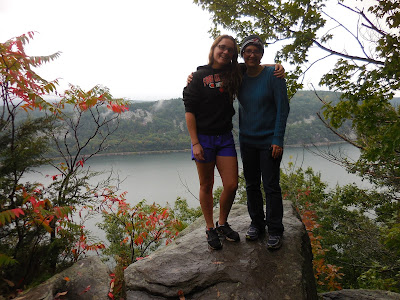 At the beginning of October, several of us went camping at Devil's Lake in Wisconsin. What an adventure that was! It rained most of the weekend. We renamed our campsite "Swamp Eric" because it was a literal mud hole. 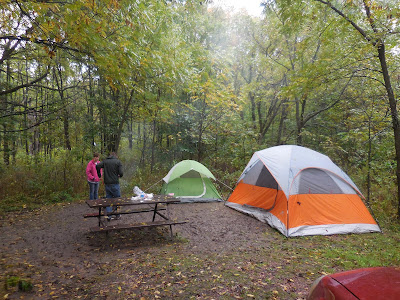 Our shoes at the end of the trip: 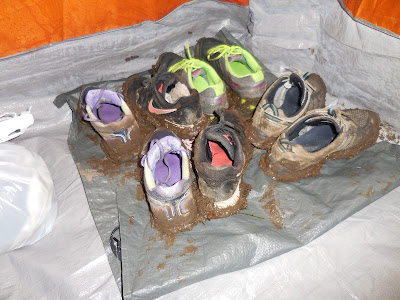 Despite the rain and the mud, I had SO much fun! We bonded through our adversity and cooked over an open fire. We shared stories (*cough cough* I'd tell you one, but you aren't a monk) and sang songs. We hiked, laughed, and didn't shower for three days. 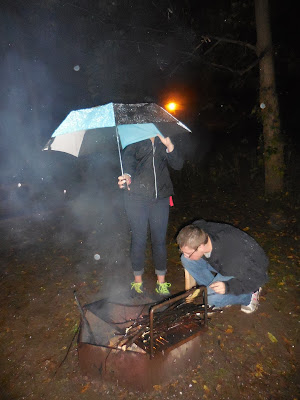 On the way home, we stopped at a cheese shop! 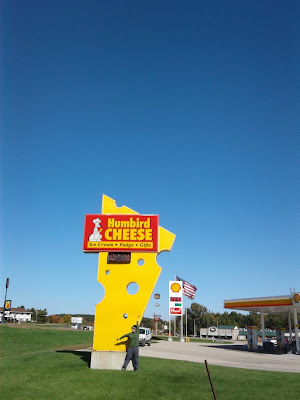 For fall break, I went home with fellow English Literature and Writing major Abby with No E. She was homeschooled like me, and she also does NaNoWriMo! During our break, we worked on an eight-page paper for our Literary Studies class, we planned for NaNoWriMo, and we went to the Spam Museum! 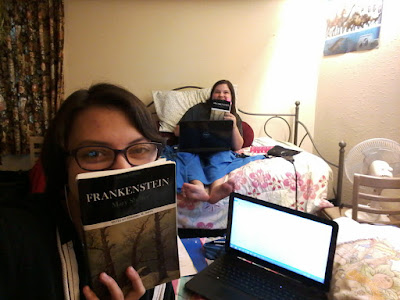 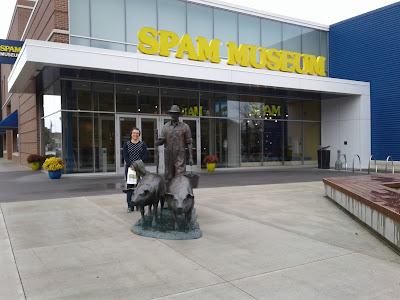 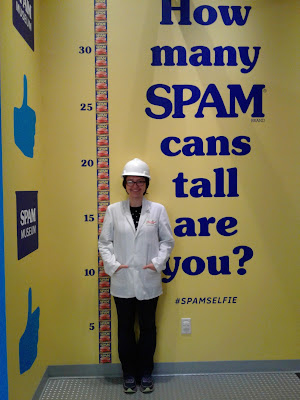 "What about schoolwork?" you may ask. "Don't you ever do homework?"
Yes. Yes, I do. But, perhaps, I shall save that for another blog post.

How are YOU? Are you doing NaNoWriMo? Have you ever been to the Spam museum?
Posted by Abbey Stellingwerff

Email ThisBlogThis!Share to TwitterShare to FacebookShare to Pinterest
Labels: college