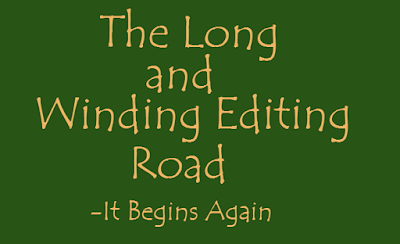 I figured that Christmas break would be the ideal time to begin the fourth draft of my fantasy novel. Despite a number of major changes to my characters, I had the fanciful idea that I would be able to finish the fourth draft during my three week break. I made excellent time through the first third of the novel; but, the second third took me by surprise. It has always been the most difficult part of the novel as the characters are between quests and nothing much happens. It is a time for character development and a time for me to lay the foundation for things to come later in the story. In past drafts, I have taken out much content from this middle section. This draft has been no different. In fact, I took out two chapters, and allocated their necessary parts to different chapters.
I've never had to make big cuts like this before. It's liberating to highlight several thousand words, hit the backspace key, and see them disappear (don't worry–I have them saved somewhere else!). It's fun to make these cuts, knowing that I am streamlining my story and making it better! I feel like a real writer.
I did, however, run across a roadblock. This roadblock has come in the shape of a character. Surprisingly—nay, miraculously!—the character who is giving me trouble is not Finn. Finn is behaving himself (for once). No, King John is giving me trouble. He's my villain and I've never felt solid with his characterization. During the last draft, I had a better handle on his character; because I was focused on my main characters, though, I couldn't devote as much time to him as he deserved. Over the summer, I wrote part of his backstory in short story form. That helped me understand him better.
Now, I have printed out the fourteen chapters that make up the middle section of my novel. I plan to go through them very carefully so that I can...

-Continue streamlining this part of the story so that the audience doesn't get bored. I want every scene and every character interaction to have purpose.

These two goals are going to take precision to complete, which is why I printed out these chapters.

I don't know how much I will be able to work on them during the first eight weeks of school because I have a lot of classwork. My workload drops significantly during the last eight weeks, however, so I hope to work on my story then! I will keep you updated.

Are you writers out there working on anything exciting at the moment?
Posted by Abbey Stellingwerff