The Long and Winding Editing Road—Ch-ch-ch-ch-changes. 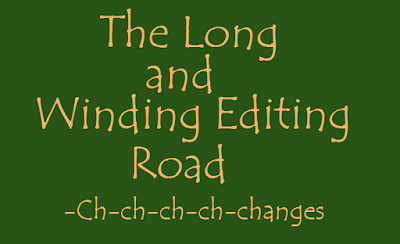 Timeline of my Fantasy/Fairytale Novel:

December 2013- After a walk in the frigid Minnesota snow, a scene pops into my head: An Elf and a Princess are climbing down a snowy mountain. The Elf is doing all right, because he can walk on top of the snow, but the Princess is struggling as the snow comes up to her waist and she is wearing a full skirt. The Elf goes back to help her.
This Elf and Princess turned out to be the first whisper of my story's main characters, Finn and Rozella.

January 2014- I start writing the story in a sky blue notebook, with only a vague idea of where the story is going and who the characters are. I continue to write sporadically throughout the next six months, completing the blue notebook and a Beatles notebook.

November 2014- In a last effort to finish my never-ending novel before the end of the year, I write 60,000 words (by hand!) for NaNoWriMo. And the book STILL isn't finished.

December 2014- I write a little more during December and then decide that I need to re-plot the entire novel before I can finish the story.

July-August 2015- I write a synopsis of each chapter on a notecard and then go through them all, fixing plot holes, tightening the story, and coming up with an ending.

September-November 2015- I re-write my novel, focusing on plot, and then let my dad read it.

February-April 2016- I re-write my novel for a second time, focusing on the characters, and then send it off to friends and family to read.

I've been thinking a lot about my book as I wait for comments to trickle back to me, and I have decided that I need to make three big changes:

1) Finn.
Surprise, surprise. If you've been reading my blog(s) for a while, you may remember THIS post, THIS post, and THIS post. All three of them discuss the problems that I've had with Finn throughout the writing and re-writing process. I don't know what that guy's problem is. He keeps making trouble for me! And it's not because he's a rascally fellow; no, in fact, he's good-natured and heroic (at least, that's how I hope he appears to my readers).
What's he troubling me with this time? His race.
Finn is an Elf, but everyone writes Elves into their fantasy stories, and they all tend to be the same: tall, thin, super model gorgeous, light, ethereal, wisdomous, and great with a bow and arrow. I tried to think of ways my Elves could be different, but I fear that they've still slipped into "stereotypical Elf"-land.
So, I decided to make up my own fantasy race for Finn's people. This is dangerous because it could go one of three ways, depending on how well I do my job as writer: one is that people could see my race as the Dollar Store Version of the Real Thing, the second is that I could make my race so crazy that no one will bother even trying to remember it, and the third is that I could find the perfect balance between the two and create a functioning, memorable race.
I am, of course, hoping for the third option. I've come up with some ideas that I think are different enough, but still manageable for the reader.

2) World building.
Basically, I have none. Or, very little. This needs to change. One of the main issues is that nothing is named because I am terrible at naming things (I've been working on this story for two-and-a-half years and still haven't thought of a good title yet). So, I need to spend an afternoon or five brainstorming ideas for the various cultures my character's run in to and then translate those brainstorms into my story.

3) Secrecy.
This change stems from a comment made by one of my readers. He noticed that several of my major characters are secretive about their past, which makes the story overwhelming because there's too much mystery.
My thought process after reading that comment: What? No! They all need to keep their pasts a secret! I am WRITER. HERE ME WRITE! ...Well, maybe he's right about one of my characters... I can't really think of a conceivable reason for him to keep his past a secret. Maybe he can be open about his past. But the other two can stay secret! Yet, he does have a point about another character, too... This character has two layers of secrecy to his past. What if I stripped away one layer? That might work. The third character has to have a secretive past, though, because it benefits the plot. Wow, that solves my problem! Now only one character is completely secretive about the past!

Unfortunately, the changes I want to make mean that I have to do yet another round of re-writing. I knew I would have to go back and add in world building, but I hadn't anticipated making any more significant changes to my characters. During this next edit, I will try to do both. I'm also going to try have this next edit done by the end of the year, which may be slightly ambitious depending on how heavy my schoolwork load is. I suppose I'll find out!

Have you writers ever dealt with a character who gives you new troubles every time you fix the ones he handed you the day before? How much secrecy and mystery do you readers think is too much in a book?
Posted by Abbey Stellingwerff

Email ThisBlogThis!Share to TwitterShare to FacebookShare to Pinterest
Labels: The Long and Winding Editing Road, writing