The Long and Winding Editing Road—Finn 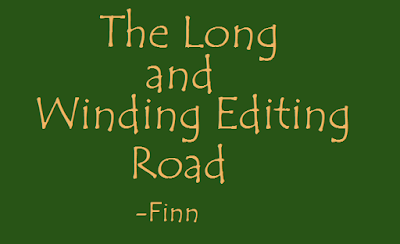 Finn, oh, Finn, oh, Finn, oh, Finn! Where to begin?
My novel has two point-of-views. One is Rozella, whom you met in my last Editing Road post. The other point-of-view is Finn, and he has given me trouble almost since Day One. I wanted him to be a mysterious, private, slightly brooding hero that makes fangirls swoon, but he ended up being too secretive, slightly whiney, and a know-it-all. It didn't help that I wasn't secure in his past or in his present situation.
Because I was uncomfortable with the original background I had created for Finn, I focused on that instead of Finn as a character. I decided to change his past and he became so much easier to write!
But then I started focusing on the present... What had Finn been doing for twenty years in the dungeon of the king? Why hadn't he tried to escape? I decided to change twenty years to five years and, again, Finn became so much easier to write!
After writing out his character profile, I figured that it would be easy to write Finn in the third draft. And it has been... until I realized two night's ago that it isn't.

Rozella is easy to write. She has a lot of the same insecurities that I do, so it's easy for me make her relatable by writing her thoughts for the reader's to see. To me, she feels like a real character because we see her inner struggles and her decision-making process. Her chapters are usually longer than Finn's and full of character development, while Finn's chapters usually advance the plot. I suppose that should have alerted me that something was wrong. I want to have balanced chapters, or else my readers will get bored with one of the points-of-view.
What made my chapters unbalanced? I thought it was that Finn wasn't getting as much character development as Rozella, so I started adding some. I used the same stream-of-consciousness approach that I had used for Rozella, but it felt wrong for two reasons:

1. If I'm writing both Rozella and Finn's character development the same, they will cease to have separate voices and will meld into the same person.
2. Men don't think the same way as women.

My dad was telling me about THIS video and I realized my problem. I was trying to make Finn think the same way as Rozella, because I knew that method worked. Well, it worked for Rozella, but it wasn't working for Finn, because he's not a woman!
How do I write male characters? I didn't know, so I asked my dad what he would do and what he would think about if he were the main character in my Fantasy Novel. He gave me some helpful comments and also a book to read on how guys think. I read the first chapter this morning and I'm already full of ideas on how to make Finn into a better character. Hopefully, this change will make Finn a lot easier to write! At least, until the next problem pops up.

There's only one last problem... Should I go back to the beginning of the story and work on Finn's character from there, or should I continue on from where I am now? Maybe I need to do some additional research before I mess around with Finn's character. Maybe I should experiment and see what happens. Maybe I need to rewrite his profile. I can't decide, and it's halted my editing, which is too bad because I was really enjoying this draft!
Maybe I'll go fix myself lunch. That sounds like a good idea.
Posted by Abbey Stellingwerff