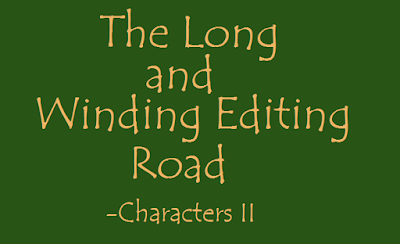 In my last post, I talked about how two of the characters in my fantasy novel were giving me trouble because I didn't know who they were. One thing that helped me get to know them better was to write outlines of what happened to them before they entered my story.
Just like it's important for nonfiction writers to know background information on their topic, it's important for fiction writers to know the history of their characters. Past experiences make people into their present selves. If you don't know where your character has come from, how can you know where your character will go? (Please tell me that I'm not the only one singing "Cotton Eye Joe" after that last sentence.) If you don't know what has molded your character's worldview, how can you know how your character will react to the events in the story?

After finishing the second draft of my novel last November, I took December off. In January, I began working on my character arcs. A character arc is a character's "inner journey" (says Google) within the main storyline of a book.
So, on note cards (I like note cards, okay?) I wrote who each character was at the beginning of the novel, their transformation, and who they are at the end of the story. Here's an example using a character from Star Wars The Force Awakens:

Finn
Who he was at the beginning: Scared, unhappy with his life choices, wishing he were somewhere else.
Transformation: Finn takes the first opportunity to escape life as a stormtrooper and keeps running away until he realizes there is something worth fighting for in the galaxy. He sets aside his selfishness and helps his friends.
Who he is in the end: Willing to sacrifice himself for his friends, loyal to friends, in a much better place than where he was at the beginning:

For minor characters I wrote out their purpose in the narrative and a summary of their character arc.
Here's an example using another Force Awakens character.

C-3PO
Purpose in narrative: Comic relief, information.
Character arc: Originally created by Anakin Skywalker. He and his counterpart, R2-D2, helped defeat the Empire. When Luke Skywalker went missing, R2-D2 shut down, but C-3PO continued to serve Princess Leia. Somehow got a red arm. No character growth because he's a droid.

At the beginning of February I decided that I should probably add physical description, personality, and motivation to my character profiles. So, rather than write new cards for everyone, I typed what I had already written into the computer along with a few additions.
For an example, it is my pleasure to introduce you to my female protagonist, Rozella:

Rozella
Appearance: 5’4”. Rib-cage length dark brown curly hair. Blue eyes. Oval face. A little bigger boned/thicker, but not fat. Curvy. Inspired by Barbara Kent and Lucy Griffiths.
I'm not great at seeing my characters (or anyone else's, for that matter) in my mind's eye, but I was inspired by another blogger to make an effort to describe my characters better. It's easy to decide hair and eye color, but what about height, body type, face shape, and type of hair? It's important to know these things for, if you're writing a character with long hair, long hair is less likely to do this: 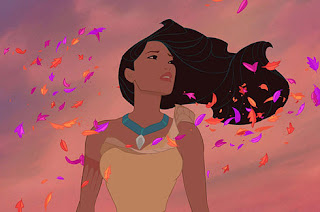 and more likely to do this:

If you want to be realistic while writing, remember that your character's hair won't be perfect all the time, especially if they are adventuring. It's also helpful to know your character's height (can they reach the tomato soup on the top shelf at the store? Does their height give them back problems?) and body type (are they self-conscious or confidant in their body? How does that effect how they interact with other characters?).


Personality: Predisposed to be timid and worry if she’s doing something right or wrong, but when she knows what she’s doing, she’s very confidant. Sweet. Kind.
I wrote three or four basics for each character's personality. When I'm working on the story, I try to keep these basics in my head so that I can ask myself, "Is Rozella too confidant here or should she be more worried? Is Rozella too mean? How can she say that in a nicer way?"


History: Kidnapped by Witch and raised by Witch.
As you can see, I didn't expound on Rozella's history much. This is because most of it is described in the first few chapters of the novel. Other characters have fuller histories.


Growth: Starts out afraid and timid and nervous. Ends confidant, knows she’s loved. Smart and optimistic.
I'm just about to start the second third of my novel, which is where a lot of Rozella's character growth happens. From this point on, I have to watch her very carefully to see if she is gradually becoming confidant, or if it's an instant change. I want it to be gradual, but I'm worried that what I have now is instantaneous change. I guess I'll find out as I continue to write!


Motivation: She wants to belong and feel loved. Also, her natural tendency to care (for animals and, later, people, too).
Just like it's important to know your character's appearance, history, and worldview, it's important to know what motivates your character. Why are they trying to achieve their goal? What motivated them to go on a quest, or to sign up for an online dating service, or start a prank war with their neighbor? Did the prank war spawn from a happy-go-lucky sense of humor, or from the childhood need to prove themselves better than their prank-master father, or from the desire to escape adulthood and regress back to childhood?
Rozella's actions nearly all come from either her compassion for others or from her desire to be loved. She was kidnapped by a Wicked Witch when she was a baby and endured the Witch's torments until she was thirteen. The Witch never loved her, so Rozella longs to be loved and accepted by someone. Her desire to belong makes her worry if people are judging her for her actions.

For each of my characters, I described appearance, personality, history, growth, and motivation. As I've gone through the first third of my novel over the past month, I've been pleasantly surprised with how well I was able to incorporate characterization in the second draft. It's way better than I expected and I haven't had to do much. The next two thirds, on the other hand, I'm expecting to be a mess. Which is why I'm writing this blog post instead of working on my story.

If you're a writer, what kind of character profiling do you do? If you're a reader, do you notice character development, description, and motivation?
Posted by Abbey Stellingwerff