The Long and Winding Editing Road—Characters 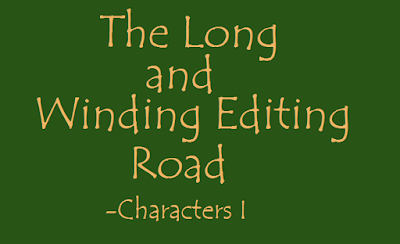 In my last editing post, I talked about how I outlined my novel and then rewrote it, focusing on the plot.
Now, I'm working on the third draft of the story. This time, I'm focusing on character development, which is something I've never focused on before.
In my novel After the Twelfth Night, I don't remember doing any character edits, and the extent of my character-building was to write out my character's names, ages, descriptions, and one or two random facts about their personalities and hobbies on a piece of paper.

In the first draft of my fantasy novel, I didn't write anything down about my characters. I had a few vague ideas in my head about who they were, but mostly let them develop on their own. Surprisingly, this worked rather well. By the time I finished, I knew who most of my characters were, and they've stayed relatively the same since then.
There were exceptions, of course. Namely, my main male protagonist and a random character named Timone who showed up halfway through the story and decided to stick around.

Finn, my main male protagonist has gone through the most changes since the beginning of the story. I intended for him to be a mysterious and brooding hero, but he ended up being a secretive and slightly-annoying know-it-all.
He started the story in the king's dungeon and had been there for twenty years, which made me ask, "What has he been doing in the dungeon for twenty years? He's best friends with his guard. Why doesn't he use that to his advantage and escape?" I couldn't answer these questions, and it caused Finn's whole character to crumble under my fingertips. His motivation and personality didn't match his past. I had no idea how to write him.
It wasn't until I was at least halfway through the second draft that I came up with a solution. Why did he have to be in the dungeon for twenty years? Wouldn't five years be better?
"I've made an executive decision," I declared to my parents. "Finn has been in the dungeon for five years, not twenty."
"Okay," they probably replied, unsure what I was talking about, but used to my random outbursts.
Suddenly, Finn was much easier to write.
Funny how one tiny detail can change the way one writes a character.

Timone also gave me a lot of trouble in the beginning. Here is an excerpt from a post I wrote on NaNoWriMo's forums, shortly after Timone first showed up in my story:


"...instead of saying 'Guard, take them to their cell,' like any normal leader, he said, 'Timone, take them to their cell.'
I know, I know... once you name something you get attached... I wasn't going to get attached, but now Timone wants to join my two main characters on their quest and I don't know what to do! I have no clue who this character is! What's his background? What's his personality? What are his motives? Is his name even Timone? I don't know!
What do I do? Should I let him tag along and see if he reveals himself to me later on? Should I tell him to 'stay!' and hope he doesn't follow me home? Should I kill him?
Sincerely,
Someone-Who-Doesn't-Do-Well-With-Unexpected-Characters-Showing-Up-Halfway-Through-The-Novel."
During outlining, Timone decided to reveal his secrets to me. Knowing who he was made him easier to write.
Something else that helped me to understand Finn and Timone was to outline what happened to them prior to my novel. I wrote out their childhoods, teen years, and adult years in chapter synopses [side note: I just found out that "synopses" is the plural of "synopsis"! Who knew]. Now, I have outlines of their pasts so, if I want to, I can write novellas about them to complement my novel.
After writing the second draft, I knew I needed to develop my characters outside of the novel, so I decided to write character profiles.
But I'll save that for the next post.
﻿
Posted by Abbey Stellingwerff