The Long and Winding Editing Road—What I've Done So Far 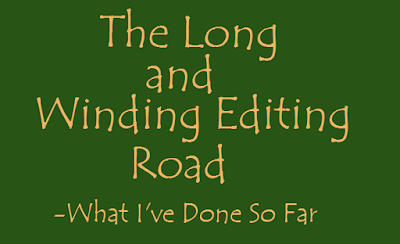 In December 2013, I had the first idea for this story (since it is still title-less, it shall hereby be known as the Fantasy Novel). When I started writing in January 2014, I had no outline and only a vague idea of where I wanted the plot to go. I love outlines, but I was curious about where the story would take me if I didn't have a plan.
Three hand-written notebooks and twelve months later, the plot had changed so considerably that I was lost. I needed to go back and plan; so, I spent much of 2015 re-plotting my novel.
I wanted to write a summary of every scene on separate notecards so that I could rearrange, add, and subtract scenes at will, but I soon discovered that writing out every single scene would lead to and overwhelming amount of notecards. Instead, I decided to write out a summary of each chapter as it appeared in the novel at the time:


Then came the hard part: fixing the plot problems! I rewrote and rearranged countless cards until I was satisfied with the story.
Cait from Paper Fury says that when she rewrites, she starts from scratch and every single word is different. That astounded me—until I began rewriting my Fantasy Novel in the Fall of 2015. Though not every word is different, I changed almost the entire book!
My only previous novel-editing experience—with my first book, After the Twelfth Night—was completely different. With After the Twelfth Night, I wrote the first draft on the computer and the second draft on paper. With my Fantasy Novel, I wrote the first draft on paper, and am working on subsequent drafts on my computer. With After the Twelfth Night, I had an outline from the beginning. When it came to rewriting, I only had to add scenes to make the story better. With my Fantasy Novel, nearly the entire plot had to be rewritten, which is why I changed nearly every sentence.
I finished the second draft in November 2015. I needed to distance myself from the story, so I put the book away during December. I've only just started working on it again, but let's save that for another post, shall we?

If you are a writer, what does your editing process look like?
Posted by Abbey Stellingwerff