Nightstand Books. But, first, What I Read in January.

Nightstand Books is a meme hosted by Jenelle Leanne Schmidt. On the first Wednesday of every month, we share the books that currently reside on our nightstands!
But before I share my nightstand, I want to share what I read in January:

1. A Season of Gifts by Richard Peck (audiobook).
My family and I listened to this on our way home from Minnesota after Christmas. Richard Peck wrote two of my favorite books EVER: A Long Way From Chicago and A Year Down Yonder. A Season of Gifts if the third installment in the "series," in that it follows the character of Grandma Dowdel out of the 1930s and into the 1950s. I highly, highly recommend these books if you are looking for a light, hilarious read filled with small-town charm.

2. The Martian by Andy Weir.
This book—originally self-published, and then picked up by a publishing company—gained even more popularity than it had originally when the movie came out last October. My dad and two of my friends read the book and gave it glowing reviews, so I decided to pick it up, too. I wasn't disappointed! The Martian is about an astronaut who is stranded on Mars after his teammates presume him dead. He uses his ingenuity and training to survive on the Red Planet. The book is, I have heard, very scientifically accurate. It is also very entertaining. My only complaints are the strong language and the occasional innuendos.

3. Symphony for the City of the Dead: Dmitri Shostakovich and the Siege of Leningrad by M.T. Anderson.
One of my goals for 2016 is to read forty (which I just changed to thirty) minutes of nonfiction a day. I started by reading the above book about Dmitri Shostakovich, who is one of my favorite composers. M.T. Anderson's book astounded me. It was so good that I have a hard time talking about it. It was as much about Russia's history in the first half of the 1900s, and about the suppression of the arts under Stalin's reign, and about the power of music, as it was about Shostakovich's life. Whether you are interested in Dmitri Shostakovich's life and music (as I was), or are interested in Russia's revolutions and Russia's part in World War Two, I recommend this book to you.

3 and 4. Joseph Stalin by Sean McCollum and Joseph Stalin by Janet Caulkins.
After reading about Stalin as a "side character" is Symphony for the City of the Dead, I wanted to know more about his life. Unfortunately, I couldn't find any long biographies about him, so I had to settle for two short books designed for school children doing reports. As such, these books were fact-filled and dull. Though I didn't appreciate the dry writing, I did enjoy the information.

5. The Great Gatsby by F. Scott Fitzgerald.
This year, the calendar in my room is book-themed. Each month features a different classic, and I am trying to read them all. January's book was The Great Gatsby. Every time I read it, this book improves in my opinion. The first time I read it, I couldn't see past the plot, which focuses on several people having affairs. The second time I read it, I had more context about the 1920s and was also able to appreciate the themes in the story. This time, F. Scott Fitzgerald's prose captured by attention. He writes so beautifully. Here is my favorite quote: "The wind had blown off, leaving a loud bright night with wings beating in the trees and a persistent organ sound as the full bellows of the earth blew the frogs full of life."

6. Star Wars: Shattered Empire
This comic book is a part of the Journey to the Force Awakens movement, which aims to fill in the thirty years between "The Return of the Jedi" and "The Force Awakens." Shattered Empire has several stories which directly follow the destruction of the second death star. The central character is Poe Dameron's mother. Both my dad and I thought this comic was just "meh." You're not missing much by skipping it.

So, what's on my nightstand this month? 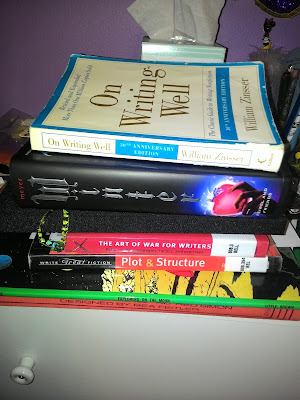 On Writing Well by William Zinsser.
This is my current nonfiction read. As the title suggests, it is about writing well. Specifically, writing nonfiction well; however, some of his points can be applied to fiction writing as well. If you write nonfiction, if you write fiction, or if you just write papers for school, I recommend this book to YOU. Yes, you. It has fabulous tips, and William Zinsser is (or, was, as he died last year) an entertaining narrator.

Winter by Marissa Meyer.
Winter is the final book in the Lunar Chronicles, which is a series of fairytale retellings. I've been trying to get through this book since November, when some friends and I went to the launch party. It's so long! This is a great series if you're looking for something Star Wars-y and romantic.

Below Winter is my journal, and, below that, are two other books on writing that I am planning on reading this month. Below those, is a poor, discarded, Tintin book that I started reading last spring and never finished. Finally, on the bottom of the stack is a book about the Gershwin brothers that I also started last year and never finished.
I'm also reading a book called The Explorer's Guild by Jon Baird and Kevin Costner, but I think I'm going to bring it back to the library because I'm just not enjoying it as much as I hoped I would.

What are YOU reading this month?
Posted by Abbey Stellingwerff