The Long and Winding Editing Road—Editing and Publishing, Oh My! 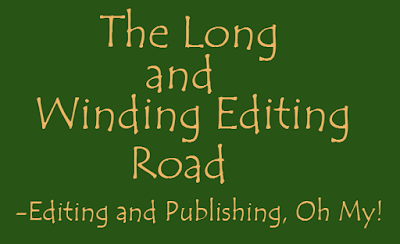 Two weeks ago, I announced that I'm going to publish my Unnamed Novel (maybe I should just call it that?) next summer.

How did that come about? you may wonder.

I'm wondering that, too, if I'm honest, because at the beginning of the summer, I had no intention of publishing this book (at least, not for a long, long time).
I've known since the beginning of the year that I wanted to finish this book by the end of 2017. As I've said before, I have been working on this book for nearly three years, and I am ready to move on to other stories.
Perhaps knowing this is what made me decide to publish. I mean, once you finish a story, you have only two options: publish it or leave it in your documents folder for all of eternity (I mean, I guess you could also print it out and have it buried with you so that in one-hundred years, when the aliens dig you up, they can have something nice to read, but what's the probability of aliens knowing English anyway??).
I don't want my book to stay in my documents folder for all of eternity, so publishing is my only other option (if we throw out the aliens).

So, how are you going to publish your book? might be your next question.

I'm going to self-publish it. I've worked so long and hard on this story that I don't want to change plot points or character arcs to fit with what's trending right now/what a publisher thinks will sell. Also, I want this book to be finished. I want it out of my hands and into the hands of the public As Soon As Possible. If I were to find an agent, query my book, and get it published the traditional way, it would be years and years before I got it published. I'd rather finish it and publish it myself.

Which website are you going to use? may be your next, logical, question.

You may not know this about me, but I self-published a book four years ago called After the Twelfth Night (a Tintin-esque adventure based on two Shakespeare plays. It's not at all historically or Shakespeare-ically accurate in any way and very much a first novel. This next novel is much better). I used Lulu.com and had a pleasant experience; however, I think I will publish my next book through Amazon's service, Createspace. I have heard good things about Createspace from people I trust, and it's easy to connect it to Kindle eBooks. I've never made an eBook before, so the easier, the better!

What's your next step? can be your final question

Finish the book, of course!
...Oh, you wanted a more specific answer? All right.
I'm back at school now, but I'm planning on reading the last round of comments on my novel and applying them to draft four before Christmas. Then, over Christmas break, I'd like to go over it again. Hopefully, it will be as near to "finished" as I can make it, though I'll probably go over it another time or two before next summer. Sometime between now and Christmas, I need to cut out some words. The novel is about 147,000 words right now, and, according to my research, that's too long. I'd agree.
In addition to the continued editing process, I'd like to come up with a title. That's kind of important.
My dad did the cover for After the Twelfth Night, and it was beautiful, so I asked him to do the cover for this book as well. He agreed! We've already been discussing what it will look like.

On the blog, you can look forward to The Long and Winding Editing Road updates, a title reveal, a cover reveal, and more over the next twelve months!

Tell me your what you've been working on—writing or otherwise—in the comments!
Posted by Abbey Stellingwerff