The Raven King by Maggie Stiefvater

Here it is: the review of the final book in The Raven Cycle, The Raven King. It has been my attempt to make these reviews as spoiler-free as possible, but, as usual, there may be a few spoilers here or there. If you don't want to be spoiled for anything regarding this series or its final book, click X now! 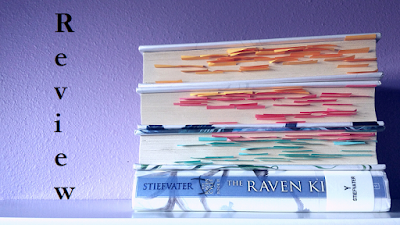 Plot & The End
As this is the last book in the series, everything is wrapped up. Things happen. Lots of things. There's heartbreak and happiness, moments of pain and joy. I really can't say anymore without spoiling a lot, so let's move on to my analysis, shall we? :p

I don't know how to feel about the climax of this series. In the three previous books, the characters have had to deal with murderous teachers, a cave-in, and LITERAL DRAGONS. The villain of this book is a demon, but how the Gangsey deals with this demon is anti-climactic compared to the climaxes of the previous three books. Also, the quest to find Glendower does not end as one would suspect, which also seems anti-climactic. This book has several things happen not as the characters would wish them to, but in a disappointing way. This is a good lesson to learn in real life... things won't always go the way you plan, and The Raven King exemplifies this. I greatly appreciate Maggie's ability to portray real life in her novels, but, at the same time, these are novels. There are enough disappointments in the real world. Over the course of the books, I came to love the characters so much, and I was so invested in their quest, that I wanted more for them in the end. Things do end happily, but I wanted to see them deal with what happened to them rather than skipping ahead several months to see how they are doing. I wanted to know what happened to the women of 300 Fox Way and some of the other minor characters. I wanted a more satisfying conclusion to the plotlines that Maggie has carefully guided us through in the previous three books.

Laumonier
I'm still amazed at how unique and developed and full Maggie makes her cast of characters in The Raven Cycle. In this book, she introduces several new characters, including triplets named Laumonier (yes, they're all named Laumonier!). How in the world does she come up with characters like this?? They're fascinating to read about.

Henry Cheng
is another new character. He is an Aglionby student who proves his worth to Gansey and becomes his friend. Gansey is, at first, distrustful of Henry, which makes the reader distrustful of him, too. Who is this new person who wants to have the same precedence as Ronan? and Adam? and Blue? Whom we've known since book one? But Henry soon proves his worth to the reader, too. At least, he did for me. He's hard not to love, what with his strange way of speaking and his inability to call Gansey Gansey. 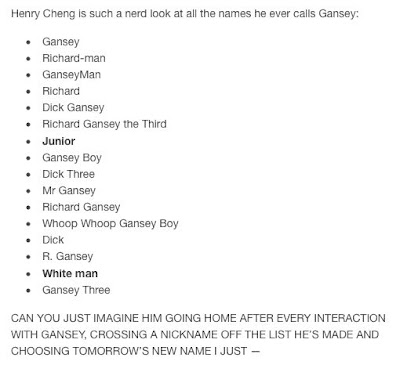 He's also a lot like Gansey and Blue. All three of them are like-minded individuals, whereas Ronan, Adam, and Noah are cut from a different mold. I think it's wonderful that Gansey makes new friends (while keeping the old—that's an old Girl Scouts song) because it shows that he's maturing. He's willing to grow new relationships rather than closing himself off to the world because he already has all the friends he needs. I don't know where Henry came from, or if he was a planned character or an accidental discovery along the way, but I'm so glad that Maggie included him in the book because he's a great addition to the Gangsey.

His feelings...were an oil spill; he'd let them overflow and now there wasn't a...place in the ocean that wouldn't catch fire if he dropped a match.

"How old were you, Whoop Whoop Gansey Boy, when you were stung by those bees?"

"No." It was satisfying and terrible to say it out loud, a trigger pulled, the explosion over within a second. Ronan looked around for bodies.
Declan swayed; the bullet had clearly at least grazed him near a vital organ. With effort, he got the arterial spray under control.

The Camaro broke down.

Content Advisory
In addition to the stuff I've already talked about (mostly swearing), there's a literal demon in this book. It influences characters to evil things, it "unmakes" a forest (the first step in unmaking the world), and it possesses people. It's scary to read about, super intense, and clearly evil.

There's also a homosexual relationship that begins in this book. It has been hinted at in the past two books that Ronan is gay and fancies one of the other male characters; that comes to fruition in this book and they begin a relationship and kiss a few times. While the Bible makes it clear that homosexuality is wrong, I do not believe that it is worse than any other type of sexual sin (such as lust, watching pornography, sleeping with someone outside of marriage, etc.). The world is so saturated by sexual sin that it is nearly impossible to get away from it; therefore, though I know that Ronan's relationship is wrong according to Biblical principles, I chose to continue reading The Raven Cycle because I felt that what I could learn from Maggie's characterization and writing style outweighed my concerns about the content.
I want to make it clear that I do not condone any of the unbiblical behavior in these books. It has made me seriously think about not only homosexuality, but also swearing and psychic activity, and how each of those things relates to me as a Christian.
To a certain extent, I think it's important for Christians to read or watch things that we disagree with because they broaden our understanding of the world around us and they encourage us to grapple with the sin of the world. Sometimes, I think Christians look at sin as a contagious disease: any minor exposure and salvation will be lost. But the truth is that we are all sinners. We are saved by the grace of Jesus Christ's death on the cross, but we are not perfect, and I think it's important to realize that.
How does that relate to The Raven Cycle? Well, the series has extracted me from my Christian "bubble," so to speak. It made me grapple with areas of sin that I normally would not think about. After reading these books and examining issues that I normally wouldn't examine, I have become even more strongly convinced of the truth of God's word.
I think that, when reading books that contain content that is contrary to the Word of God, it is important to examine not only your heart as you go along, but also the Bible to see what it says about what you're reading. That way, you can stay grounded in the truth as you go along. It's a lot harder to deny truth if it's constantly before your eyes.

In Conclusion
There are many, many good things about The Raven Cycle by Maggie Stiefvater. Her characters, prose, plotting, and pacing should be studied and emulated. But, for all of the good things in The Raven Cycle, there is an equal number of significant content issues for Christian readers. If you are thinking about reading this series, examine these issues, your own heart, your own susceptibility to certain sins, and pray pray pray before making your decision.

Have you made it to the end of this series review? If you have, good job! We will return to normal (whatever that is) programming on Saturday. What do you think of The Raven Cycle? Have you read it? Will you read it? Why or why not? Let's have a conversation in the comments!
Posted by Abbey Stellingwerff