Welcome to my review of the third book in The Raven Cycle, Blue Lily, Lily Blue. As with the previous two books, I am trying to write a non-spoilery review, but there will probably be a spoiler or two that slips passed my radar (like the Rebellion onto a First Order ship...), so beware! 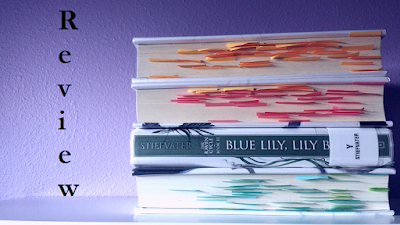 Plot
Maura is missing. The Gangsey goes spelunking and deals with school. Lots of little plot points are moved forward, and the characters grow. Even the search for Glendower moves forward as Gansey, Blue, Ronan, Adam, and Noah find a big, person-sized clue about the king.

As far as plots go, this one is definitely about the build-up to The End, but it is not slow paced. There is a lot of character development, relationship development, and plot development without spoiling the climax of the final book. Maggie is excellent at pacing. She intersperses action with heartwarming (or heartbreaking) interpersonal scenes. Speaking of interpersonal scenes... a few of my favorite scenes are in this book (like when Ronan and Adam go to the store together and crash their shopping cart). Also, this book has Malory, who may not have a huge purpose, but he adds an element of quirkiness and humor that makes an ever-darkening series a little bit brighter.

Maggie Doesn't Care
I think she was losing her mind in this book... Her writing has always featured a unique voice, but she throws out all conventions and does whatever she wants in this book. It's hilarious, and I wish I could have been there to see her editor's face when he first read it. For example: "She slouched back and sighed big enough to make her lips go blbbphhbbbt." This is also the book that gave us "SQUASH ONE SQUASH TWO."

New Faces
We have Greenmantle, the narcissistic, cowardly, supernatural artifacts collector who is rather amusing to read about. We have Jesse Dittley, the extremely tall country man who berates Blue for NOT EATIN' HER GREENS (his dialogue is entirely in caps because his voice is so sonorous... also evidence that Maggie went crazy during the writing of this book). Finally, we have Malory, Gansey's mentor in all things ley line-related. Malory is from England and comes with a Dog (capital D). He likes tea (but not when it's brewed by teenage boys in their bathroom), and he's a big fan of pigeons. He makes cameos in the first two books as a disembodied voice on the phone, but he actually comes to visit Gansey in this book. All three of these characters are as wonderfully written and developed as anyone else in Maggie Stiefvater's universe. She does very well developing large casts and, as I've said before, making all of her characters into real people.

Henrietta and her environs were a paint box of colors.

"It's a terrible word, anxious. It makes one think of wringing hands and hysteria and bodices."

Even now, after the sun had gone down, [the attic] was several degrees warmer than the house, which made it feel small and close, like a jacket.

Really, with these genetics, I should be taller.
[Abbey Insert: Same girl, same]

Content Advisory
There's not much to say in this department that I haven't said already. There are still language concerns and rituals. The only differences from previous books is that is contains several acts of possession and a boy-boy crush. I want to talk more about both of those things in my review of the final book, which shall be live on Wednesday!
Posted by Abbey Stellingwerff