The Dream Thieves by Maggie Stiefvater

Welcome to my review of The Dream Thieves, the second book in The Raven Cycle by Maggie Stiefvater! Since I went so in-depth about setting and writing style in my review of The Raven Boys, I thought I'd skip that for my other three reviews and focus on other things instead. Once again, I'm going to try to make my review as spoiler-free as possible, but I'm sure there will be some that I miss, so beware! 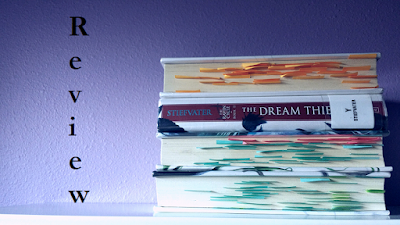 Plot
A hit man comes to Henrietta to find the Greywaren—a magical device that can take things out of dreams and into the real world—for his employer, a collector of supernatural artifacts. Gansey, Blue, Adam, Ronan, Noah, and the other characters from The Raven Boys are also involved with the Greywaren, and become involved with the hit man as a result. Gansey and Blue become better friends, Adam is angry and at odds with everyone, and Ronan is getting into trouble with the drag-racing, drug-smoking Kavinsky. And it all comes to a fiery conclusion on Fourth of July.

The Dream Thieves is my favorite book in the series because, for the first time, we get to see life through Ronan's point-of-view, which gives a lot of insight into his character. This book also has some of my favorite scenes from the entire series in it. This book also features my favorite character, the Gray Man. Also, this book has dragons. As far as plot goes, it's not as easy to grasp as the first book. There are a few things that don't make sense and could be plot holes... though maybe I wasn't paying enough attention. It's a book about secrets and fear and how the characters will handle those two things.

The Gray Man
is my favorite character. His career causes him to be cold, calculating, and dangerous... but, really, he has a huge heart, loves Old English poetry (and can recite it. In Old English. Be still, my beating heart), and can be quite oblivious to normality sometimes. I can tell that Maggie had a fun time writing him because every chapter in which he features is written differently the other chapters in the book. They're very nonchalant and matter-of-fact. The Gray Man is very sensible and also quite heroic. I love him.

Blue
We get to learn more about Blue in this book... like, she tries, really hard, to make herself seem different. Also, she's not a tough girl at heart. Someone gives her a pink switchblade, and she's afraid that she'll end up cutting herself instead of enemies (which she does). She stands up for herself, but she blushes furiously as she does it. She knows that she doesn't need to impress people like Ronan or Kavinsky, but she still tries anyway. She is incredibly smart and sensible, but she's also vain. She's got flaws, and that's what makes her human. She's also not just a love interest, and she even says that to Adam (she's a bit of a feminist, but not overbearingly so).

Details
In my review of The Raven Boys, I mentioned that Maggie is great at adding character and setting details but no in an info-dumpy way. She makes every detail count for something, whether it's giving insight into a character, or adding a joke to lighten the mood. I get the strong sense that every word that Maggie sets to paper matters. She doesn't say too much, and she doesn't say too little. She says just the right amount.

Maggie is also great at creating continuity throughout her books. For example, the running joke that Blue hates Gansey's top siders and polo shirts. And let's not forget the continuity she creates by using repetition to her advantage! She uses a lot of repetition to emphasize stuff in her books. The most impressive use of repetition comes in book four when she starts several chapters in a row with "It was 6:21."

Another thing that I love about The Raven Cycle is the linguistic and historical detail Maggie puts into the books. She not only uses English to her advantage, but also Latin, Old English, and French. There is so much Latin in this series! And in this book, a lot of Old English due to the Gray Man. She not only includes many phrases of these languages (often without translation, so you need Google translate near you in addition to a dictionary), but references literary works and events from history also. Maggie must be so smart (and a great researcher!). Serious work goes into these books, and I admire and appreciate that a great deal. If I know that someone has put effort into something, I automatically enjoy it more than I normally would.

The Gray Man had been called effervescent once, in an article. He was fairly certain it was because he had very straight teeth. Even teeth seemed a prerequisite for effervescence.

Gansey, dangling his arm outside, patted the side of the car as if it were a horse. "That'll do, Pig. That'll do."

As he sat, a single mosquito found its way into the car and worried at his ear, a high tremelo against the basso continuo of the rain and thunder.

Content Advisory
Although this is my favorite book in the series, it also has some of the most worrying content. There's a character in this book called Kavinsky and he is the scum of the earth. He drinks, he makes and does drugs, he swears to rival Ronan (it's real fun when the two of them are in a scene together *rolls eyes*), and he's always making inappropriate sexual comments about everyone. There's one scene in particular that is fairly intense where Kavinsky and Ronan get drunk and pop pills together (for a plot purpose, but still, it's not great to read about).
Luckily, the Gangsey (as Gansey and his friends are so affectionately called by their fandom) knows that Kavinsky is scum, but that doesn't stop us from having to read about him and his despicable lifestyle. This is also the first book where we get a hint that Ronan is gay, but I'll discuss that more in my review of book four.
Maggie holds nothing back in her villain creation. She makes them as horrible as she can and does not spare the sensitive reader at all. If I had a hard time recommending book one because of the content, I absolutely cannot recommend book two, yet there is still a lot to learn in this book about writing. Again, before you pick up this series, think and pray about it.
Posted by Abbey Stellingwerff