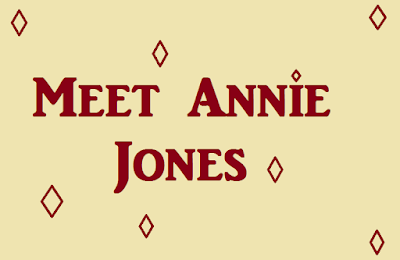 1. How old is she mentally and physically?
Annie is 69 when the book begins, but she feels about 80. Annie is an old-fashioned broad made even older by her conservative upbringing. She's also not in the best of health (so she thinks) and complains (though she wouldn't call it that) about her joints and her bones and her skin all day every day.
2. Did she have a happy childhood? Why/why not?

Not particularly, by today's standards. Her parents were very strict and didn't allow their children to have much fun. Annie's childhood consisted of working hard in school, working hard at home, and going to church.

3. Past/present relationships? How did they affect her?

-Annie grew up with both of her parents, a younger brother, and a great-aunt in the house. Her great-aunt and father were the ones inspiring a good work ethic and unwavering devotion to church into the other members of the family. While Annie appreciates these things, they did cause her to grow up a bit judgmental with a low tolerance for nonsense and imagination. They've also caused her to be grumpy and easily-annoyed because, somewhere, deep down, she is under the impression that fun=laziness. You'd be grumpy, too, I suppose, if you thought you could never have fun.
-Annie is married to Herbert, who is also traditional and stuck in his ways. He doesn't usually take other's feelings into account and under-appreciates everything Annie does for him. Although he is not mean, he believes that force is a good way to accomplish things. As a result of being married to Herbert, Annie has become a bitter old lady and a bit spiteful.
-Una and Mae are Annie's best friends from forty years previous when they met working in a factory during World War II. They remain the only people who can get Annie to have fun and not feel guilty, belly laugh until she cries, and be nice instead of stingy to strangers.

4. What does she care about?

The loves of Annie's life are her four sons, three daughter-in-laws, and six grandchildren. Annie despises coffee with the other old ladies at church, she hates small talk with grocery store clerks, and she can't stand conversation with her husband, but she has all the time in the world for her children and grandbabies.

5. What is she obsessed with?

See above question. Also, she's obsessed with knitting her grandchildren clothes while their mothers look on, horrified.

Annie worries a lot about her grandchildren and their health and safety. Her biggest fear is that one of them will fall ill, or fall over, or fall in love with the band Queen (whom she thinks is the spawn of the devil himself [*cough cough* a view that the author does NOT share]).

7. What is the best thing that ever happened to her? The worst?

The best thing that has ever happened to Annie is meeting Una and Mae. Without them in her life, Annie would be even MORE crotchety than she already is! I dread to think of an Annie with her Una and Mae. The worst thing to happen to Annie was losing her first baby, a girl. She doesn't talk about it.

8. Most embarrassing thing that ever happened to her?

One time, Annie and Herbert were having an argument about who should clean up the kitchen and Annie's mother-in-law came into the room and not only heard them fighting, but also saw Annie's messy kitchen. Annie, who prides herself on being a proper hostess and a good housewife, was mortified.

Annie's biggest secret is that, occasionally, with Una and Mae, she enjoys a glass of whisky. The three of them would sometimes drink a glass after walking back from the factory together on cold, winter nights. It's the most rebellious thing that Annie has ever done, but when she tries to drink a glass by herself, it just isn't the same.

10. What is the one word you would use to define her?
Stubborn.

So, there's a small look into Annie! I'm looking forward to writing her. I think she'll be an entertaining character.
Posted by Abbey Stellingwerff