Some Thoughts on Lost in Space

Here's a fun fact: one of my close friends is also named Abby (though she spells her name without an E, so does it actually count? XD), and we are the exact same age and in the exact same major. We decided to watch Netflix's Lost in Space series together, and let me tell you... when two storytellers who have taken classes in literature and writing for two years watch a show together, boy, do they have opinions. 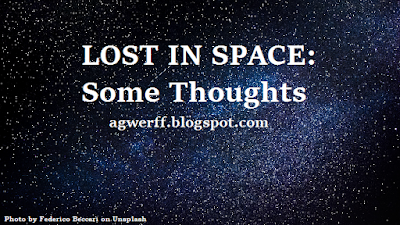 *These opinions are my own and do not necessarily reflect the opinions of other Abb(i)(e)(y)'s in the world.
**I try to stay as spoiler-free as possible, but some may still sneak in.

Here another fun fact: sci-fi is my favorite genre to watch, so I had high hopes for Lost in Space. Unfortunately, it fell short of my expectations, and here's why:

Humans have been leaving earth to settle on Alpha Centauri, a far away planet. The Robinson family is en route to their new home when their ship is attacked and they crash on a habitable planet. Will Robinson, a young boy, makes friends with a robot on the planet's surface, but the robot is the least of the family's problems as they explore their new home, try to make contact with other survivors, and meet Dr. Smith, who is not all that she seems.

I have never felt so stressed out watching a TV show before. In fact, I liken the stress of watching Lost in Space to the stress that I felt a few days ago when making a rough plan of what classes I will take during the next two years of college; however, my stress dissipated when the tension became predictable. The plot of Lost in Space is basically Murphy's Law: everything that can go wrong goes wrong (many times because of misuse of common sense). I got tired of bad things happening to the characters all. the. time. Sure, torture your darlings, but give them a break, too! Predictable tension and lack of meaningful, character development time (like the scene in Tangled when Rapunzel heals Flynn's hand while they sit by the fire) made me frustrated and a little bored. The only thing that kept me going was my hatred of Dr. Smith and curiosity at what monstrously foul thing she would do next (but more on her later).

Another thing that I didn't think worked well was the use of flashbacks. They were used inconsistently throughout the ten episodes and seemed more like a convenient way to explain backstory than a meaningful explanation of where the characters came from. Backstory is better revealed in small chunks along the way, rather than, as Abby-without-an-E said, "chucked at you like candy at a parade." The flashbacks in Lost in Space are along the lines of... "bam bam. Have some overwhelming candy," much like when Marshawn Lynch chucked Skittles to Seahawks fans after winning the Superbowl.


The flashbacks would have worked better if they had been in every episode, had been more linear, and hadn't been a plot device only.

You may have noticed that I used the word "meaningful" in correlation with characters twice while talking about plot. That's because I felt like the characters weren't meaningful, which meant that I didn't really care for them.

By meaningful, I mean the writers didn't take the opportunity to develop them through those quiet moments. They didn't show the characters caring for one another after a traumatic event or grieving for a dead team member. (Mild spoiler incoming!) For example, Judy is a doctor, and she looses her first patient in one of the episodes. Rather than experiencing a lack of confidence (or even being shooketh!), Judy is fine and continues as if nothing happened. This would have been a great time to develop her character. (End spoiler.)

By the second episode, I felt a little betrayed by the Robinson family. They had been set up one way in the first episode but seemed to change roles by the second episode. I thought that Judy was going to be the wild, trouble child and Penny was going to be the calm, sensible one, but it turned out that their roles were reversed.
Additionally, characteristics that had been set up in episode one weren't present after they served their purpose. In the first episode, Will froze up (no pun intended) several times when he had to make snap decisions, but he didn't have an obvious problem with that later in the show.

And then there's Don... He was probably my favorite character because he was funny and because he has a chicken named Debbie, but he is also the hugest caricature that I've ever come across. Also, Debbie disappears during the middle of the show, and I was afraid they'd eaten her! Don is a rogue-ish smuggler with a heart of gold and a tragic backstory. He is a Han Solo or a Carswell Thorne but with nothing to make him unique (except his magically disappearing chicken).


Now I have to talk about Dr. Smith. First of all, she is despicable, and I hate her. I haven't despised a villain this much since reading Harry Potter (Umbridge, I'm looking at you!). If this were a fantasy book rather than a sci-fi TV show, I would nominate Dr. Smith for Most Nefarious Villain in the Silmaril Awards (coming September 3rd!). Second of all, she makes NO SENSE. She has no motive for the terrible (and sometimes nice?) things that she does. A flashback tried to explain her backstory, but it still didn't explain why she does the things she does. If I remember correctly, there is a scene where she tells Maureen how she was the least-loved child, but it was told in such an info-dumped way (and Dr. Smith is such a liar) that I didn't know whether to believe her. Either way, it is too flimsy a motivation to make her do such horrible things. Honestly, I think she is insane. What else explains her unpredictable nature and lack of common sense? Many times, her goals and the Robinson's goals were the same, but Dr. Smith's interference in plans that would ACHIEVE THE SAME GOAL caused the Robinson's pain and hurt. Grrrrr... She aggravates me. Abby-without-an-E is invested in the show's second season only because she wants to see Dr. Smith sucked out an airlock.

I really liked the robot. He was all around interesting, and I wished that they would have focused on him, his species, and their technology more than on Dr. Smith's evil scheming. I also thought that the planet that they crash landed on and its creatures was super cool.

Lost in Space featured too much suspense at the expense of character development for my taste, but it is an interesting show and prompted much discussion between Abby and I.

Have you seen Lost in Space? Why did you like/dislike it? I'd love to hear from you!
Posted by Abbey Stellingwerff