Star Trek Beyond, a Review

Some of you may not know this about me: I am not just a casual Star Trek fan; no, I am a Trekkie. I own socks with Spock's face on them. A giant Star Trek puzzle graces the floor of my room. I have a shelf dedicated to Star Trek books (including a Star Trek pop-up book). I've bought several magazines about Star Trek. I baked Star Trek Christmas cookies. I've gone to Halloween parties dressed as a red shirt. I wore my blue Star Trek uniform to choir on the day that Leonard Nimoy died. My American Girl Dolls and my Build-a-Bear have Star Trek uniforms. The other day, I bought my first Star Trek action figure (it was Morn). I'm listening to Star Trek soundtracks as I write this blog post.
Like any self-respecting Trekkie, I don't believe that Star Trek (2009) and Star Trek Into Darkness live up to the Star Trek that Gene Rodenberry created. Because of this, I haven't followed any news about Star Trek Beyond. But, when I had to opportunity to see it a few weeks ago, I did. I had low expectations, so the film completely surprised me! I left the theater with a huge smile on my face, for Beyond felt like a Star Trek movie. Below is my review, so beware of spoilers!


The Plot
966 (significant because The Original Series premiered in September, 1966) days into the Enterprise's five-year mission, Captain Kirk and his crew stop at Yorktown station. They have barely docked when the station receives a distress call from an escape pod. The woman inside says that her ship has crashed on a planet in the middle of an uncharted nebula nearby. The Enterprise is sent to rescue this ship, but it turns out to be a ruse! There is a hostile swarm of aliens inside the nebula who have been spying on the Federation. They are bent on destroying the peaceful organization with an ancient weapon, which they only have half of. The Enterprise, of course, is carrying the second half of the weapon.
The swarm destroys the Enterprise [I thought saucer separation wasn't supposed to happen until Next Generation?] and takes its personnel hostage. Only Scotty, Captain Kirk and Chekov, and Spock and Dr. McCoy are not captured. They must rescue the crew and find a way off of the planet before Krall—the leader of the swarm—assembles the weapon and destroys the Federation, starting with the Yorktown station! 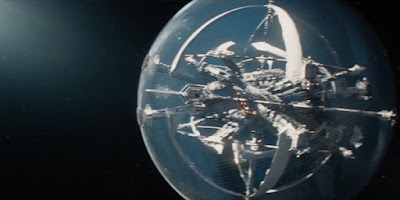 The story turns out to be one of revenge, which is a plotline that I'm not fond of. I didn't think that Krall's motivation for revenge were strong enough to fuel his actions. The script-writers, however, managed to write a coherent and complete plot, balance several side plots, and made the story seem like a Star Trek episode in movie form, which I greatly appreciated!
One thing that I loved was that some things were left up to the audience to figure out on their own. Nowadays, people expect stories to be so simple that they don't have to connect-the-dots, so to speak. In Beyond, the writer's gave us context clues and let us figure things out for ourselves. For example, they gave us hints about Krall's identity, and I figured out who he was before The Big Reveal.

The writer's also did a fabulous job with the side plots. Hikaru Sulu, for example, has a side plot that is shown only in the background of the movie. At the beginning, during Captain Kirk's log entry, the camera pans from crew member to crew member and we see that Sulu has a picture of a little girl on his desk. "Aw, he has a family!" the audience thinks. Later, when the Enterprise reaches the Yorktown, we see Sulu, his partner, and his daughter reuniting in the background. When Yorktown is being attacked by the swarm, we see Sulu's partner and daughter running for safety. Because we connected-the-dots that Sulu cares for these people, we are worried for them, too, and hope they that get to safety. At the end of the movie, we see Sulu and his partner at Captain Kirk's birthday party, so we know that Sulu's family is safe.
Now that is how to write a side plot! Especially, in my opinion, one featuring a gay couple. I didn't feel like the writer's were shoving the homosexual agenda in my face. I could look at Sulu and his partner and feel sorry that they don't know God and have succumb to the world's definition of love, and then I could move on and admire the movie's storytelling. The writer's were smart enough to know that focusing on Sulu's relationship would detract from the main plot and from the main side plot, so they kept it in the background of the movie, while still developing Sulu as a character.

We don't know what's happened in the three years since the events of Into Darkness, and this is apparent in Beyond's main subplot, which features Spock. The movie doesn't stop everything to explain the thoughts and actions of Spock in the past three years, though, but tells us gradually through several dialogues with Doctor McCoy. I appreciated this, as an info-dump would have rushed Spock's character development.

You can tell that Star Trek Beyond—as opposed to the other two movies in the reboot franchise—was written by Star Trek fans. Both Simon Pegg and Doug Jung, who co-wrote the script, were Star Trek fans before becoming involved with the new Star Trek movies. Director Justin Lin was also a fan before making the movie. I appreciate based-on movies that are made by fans because they represent the heart of the originals. Star Wars: The Force Awakens, the Tintin movie, and the Lord of the Rings movies are some other movies made by fans that I enjoy.
Because Beyond was made by fans, there are many "Easter eggs" referring to other Trek characters, episodes, and lore. For a list, check out this link. My favorite was near the beginning of the film. Captain Kirk is making a log entry and he says something like, "966 days into our five year mission and things are starting to feel a bit episodic."

Characters
Star Trek Beyond was filled with so many great character moments and so much character development!
Karl Urban, who plays Doctor McCoy (very excellently, too, I must say. He was a Star Trek fan before getting the role of Doctor McCoy, and you can tell it in his portrayal), nearly didn't come back to film Beyond because he felt that Doctor McCoy had been "marginalized" in Into Darkness. When he found out the writers' and director's plan for the character, however, he decided to join the movie, and I'm so glad he did! His interactions with Spock are just like the interactions between the Spock and McCoy of the original timeline. They were my favorite part of the movie. 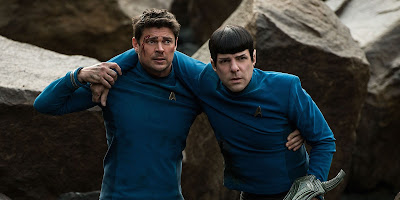 Jaylah is a new character and, from the trailers, she looks like a strong, warrior princess character that Kirk will definitely fall in love with. In fact, Jaylah is more like Rey (from The Force Awakens) than a warrior princess. Like Rey, Jaylah has no parents and is stranded on a strange planet. She learned to take care of herself out of necessity, rather than out of a want to be A Strong Woman Who Needs No Man. I thought that she was a wonderful addition to the cast, and I loved that most of her interactions were with Scotty, rather than with Captain Kirk. 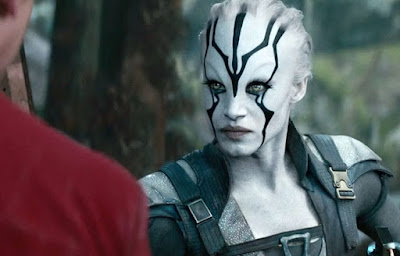 Theme
The biggest theme in Beyond was unity vs. chaos. The United Federation of Planets is, obviously, in favor of unity and peace. The villain Krall, on the other hand, grew up as the Federation was just forming. He was a part of MACO, a military operation (watch the Enterprise TV series for more information), and believes that war, rather than peace, develops character. He raised some interesting questions and had some interesting debates with Uhura. The theme was carried out well, and throughout the story.

Humor
The humor in the rebooted Star Trek movies has always been great, and this movie is no exception. The banter between Spock and McCoy, and between McCoy and Kirk is wonderful. My favorite part was when Kirk, Chekov, Scotty, Spock, and McCoy are trying to find the rest of their missing crew and Spock tells Chekov to scan for a radioactive alloy from Vulcan.
"Why would a Vulcan alloy be on this planet?" someone asked Spock.
"I gave Lt. Uhura a necklace made out of it," replied Spock.
"You gave your girlfriend radioactive jewelry?!" exclaimed Doctor McCoy.
"The radiation is not harmful," said Spock.
"Oh, so you gave your girlfriend a tracking device?" Doctor McCoy said.
Spock looks incredulous "... That was not my intention." 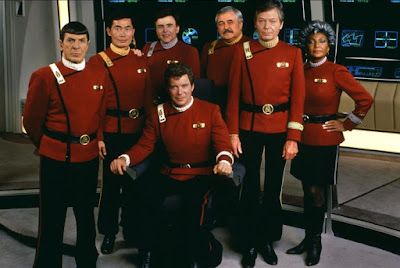 I was NOT expecting such a great tribute to the Original Series crew whom I love so dearly. It was lovely.

Two last notes
Usually I don't notice movie soundtracks, but Beyond's soundtrack caught my attention! It was like the Original Series music had been mixed with the 2009 movie's soundtrack and spiced up with a bunch of new chords. I liked it a lot.
One thing I disliked about the movie was the cinematography. There were too many weird angles and 360 degree camera turns for my taste. The story and the character development more than makes up for my motion sickness, though!

I felt like the 2009 movie and Into Darkness were an extremely long prologue for this movie. Trekkies: don't worry, Beyond is a good Star Trek movie, and worthy of coming out during Star Trek's 50th anniversary year.
I can't wait for Star Trek Beyond to come out on DVD so that I can watch it again (and again and again)! It is the best of the new movies, and I like it more than some of the old movies, too (*cough cough* The Motion Picture *cough cough*).

Only one thing remains to be said... 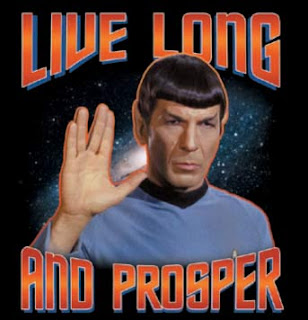