I recently saw Doctor Strange (twice!) and loved it so much that I thought I should write a review! 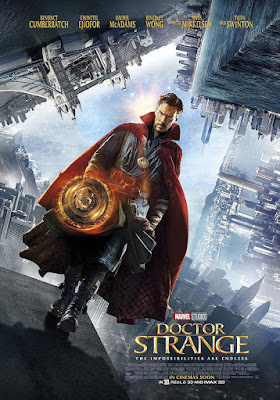 The Plot
Stephen Strange is a highly successful and highly paid surgeon. He is also highly arrogant, which is why a car accident that disables the use of his hands is hard for him to come to terms with. He spends his fortune trying experimental treatments to heal his shaky hands. Finally, nearly out of money and options, Strange travels to Nepal to find healing in mysticism. Instead, he kinds Kamar-Taj, a magical order that protects earth from attacks from other dimensions. He learns magic initially to heal his hands but then finds himself involved in something much bigger: the protection of earth from a dimensional being called Dormammu.

While I loved this movie, the plot was my least favorite part.
Doctor Strange is a little like a salad. The plot is the lettuce, but not just any kind of lettuce. No, the lettuce is the kind of lettuce that you get in a grocery store kit whose expiration date is tomorrow. Despite its wilted lettuce, however, the salad still tastes good because of what you put on top. By adding fancy dressing, nuts, dried fruit, and a sprinkling of sunflower seeds, the salad is no longer sad and droopy, but it is exciting and fresh. For Doctor Strange, the cinematography, characters, and theme are the dressing.
The reason that the plot is the lettuce is because it's a plot that I've seen before: a successful man loses what makes him successful and goes on a journey to heal/find himself; he realizes in the end that he's a part of something much bigger than whatever made him successful in the beginning.
Marvel managed to make this storyline interesting because of the other elements of the film, so let's examine them, shall we?

Special Effects
I think everyone agrees that the special effects in Doctor Strange are very impressive. The fight scenes in the mirror dimension looked like they were taking place in a kaleidoscope. 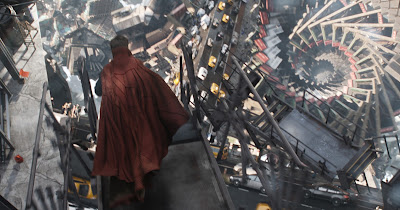 I loved the parts where Doctor Strange was in another dimension. He first experiences this at the beginning of the film when the Ancient One shows him her power. The doctor is shown some strange stuff.

The second experience in another dimension is at the end of the film when Strange goes to bargain with Dormammu. The colors are gorgeous. 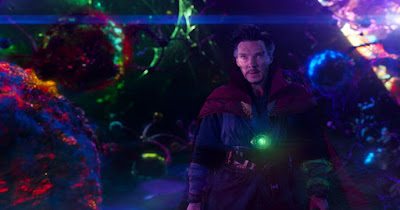 The effects in this movie can be really weird and slightly psychedelic so not everyone may enjoy them. Personally, though, I loved them.

Characters
Doctor Stephen Strange is, like the plot, pretty basic. He does, however, have good character development. He starts out the movie as arrogant, self-centered, and self-sufficient.
Doctor Strange's self-interest is evident throughout the movie. When he first loses the use of his hands, he refuses help from his friend Christine. He prefers to do things, such as shaving, himself. When his hands shake too much for him to shave, however, he lets his appearance fall into disrepair. 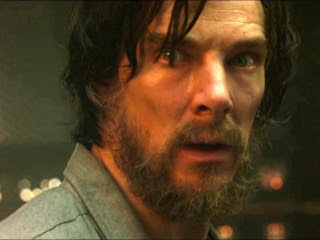 When he first comes to Kamar-Taj, he is skeptical first of the magic that they use—preferring to stick with his knowledge of science—and second of his own abilities. It takes a life-threatening situation to motivate Strange to use magic. Later, he only fights and kills someone to save his own life.
By the end of the movie Strange has changed, though. This is most evident during the climax. Rather than a big fight scene, Strange goes to bargain with Dormammu, who is trying to consume earth. Doctor Strange sacrifices himself by containing himself and Dormammu in a never-ending time loop. Instead of thinking only of himself, he decides to save earth. I loved this ending because it showed Strange's character in two ways: first, in his growth. Second, in that he is an intelligent man and not necessarily a fighter. It makes sense for his character to outsmart Dormammu rather than destroy him.
One thing I did not like about Strange's character is that once he starts believing in his abilities to use magic, he quickly becomes one of the most skilled sorcerers in Kamar-Taj, yet as soon as he is thrust into a real fight, all of his alleged skills are nullified and it is apparent that he is still a novice. I hate it when stories do that. If your main character is great in training, make him or her great in battle, too. This works the opposite way as well: if your main character is horrible at fighting in training, make him or her horrible in battle (or, you know, if they've never had any training, don't let them win against their highly trained opponent *coughcoughReycoughcough*).

Christine Palmer is a nurse at the hospital that Doctor Strange works at. It is hinted that they were romantically involved at one point but are still friends now. I liked her character. When Strange insulted her friendship she demanded an apology. When he didn't respond she left and didn't come back. She didn't even respond to his emails. 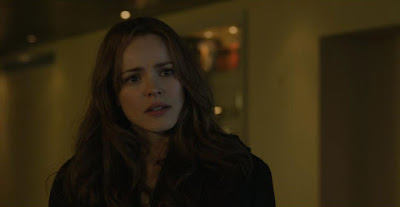 Girls, if a guy treats you like a jerk, look to Christine as an example of what to do. Distance yourself emotionally (and physically, if need be) from him until he not only apologizes, but also shows in his actions that he has changed.
Although there is not enough screen time to show Strange's changes toward Christine, he does apologize to her. She is willing to forgive him and help him again.

The Ancient One is the leader of Kamar-Taj. The only things that we learn about her are that she is very old, Celtic, and doesn't like to talk about her past. 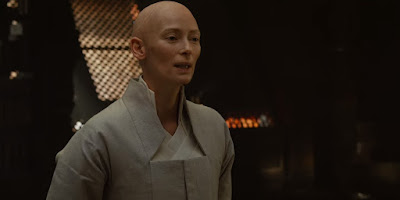 She is an interesting character because she is protecting earth from dimensional threats while drawing power from the Dark Dimension (where Dormammu lives) to keep herself alive so that she can keep protecting earth. The Dark Dimension is a negative thing, as the villains are also drawing power from it, yet the Ancient One feels that the risk outweighs the outcome. She thinks that she is doing the right thing. Other characters do not.

Mordo is Strange's friend and mentor at Kamar-Taj.

From something he says early in the film we learn that he came to Kamar-Taj to learn how to defeat his enemies. What kind of enemies, I wonder? Because the Ancient One deceived him about her connection with the Dark Dimension, Mordo is disillusioned with the sorcerers and he leaves. An end-credits scene shows us that he has created for himself a mission to rid the world of sorcerers as there are "too many." I'm looking forward to seeing what Marvel does with him as there is a lot of potential for his character.

Wong is the librarian of Kamar-Taj and one of my favorite characters. A running gag throughout the movie is that he doesn't laugh which creates humor for the audience. 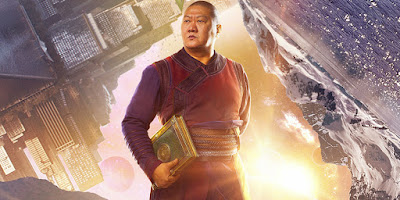 I don't know if Doctor Strange's cape counts as a character, but I'm going to mention it anyway. There is some magic that is too powerful for a human to use, so the sorcerers imbue items with magic. The Cape of Levitation is one such relic. 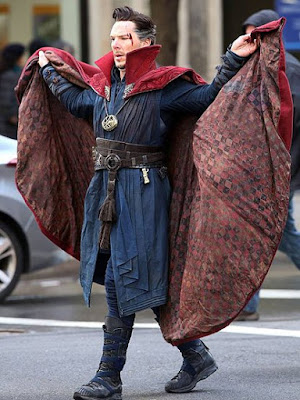 It chooses Doctor Strange to be its master and spends the rest of the movie taking care of him. It rescues him when he falls from high places, it helps him fight, and it even wipes away his tears (much to his chagrin). It reminds me of the Magic Carpet in Aladdin. I can't wait to see more of the cape!

As far as villains go, Kaecilius is pretty much Anakin Skywalker. He's a good-guy-gone-bad who betrayed his magical order in order to follow a dark lord who has promised him life. 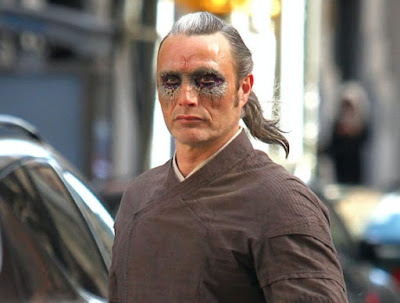 Dormammu, like Kaecilius, is a standard villain. He is a dimensional being who wants to take over earth. 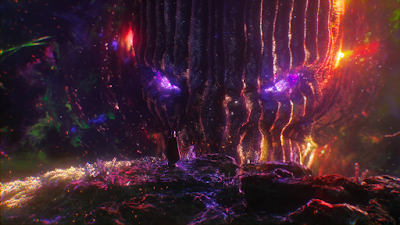 My only question is: why do people always want to take over earth? Aren't there other planets out there?? Are they having as much trouble as earth is with aliens and creatures from other dimensions??? I mean, not only does earth have to deal with all the creatures from the Marvel universe, but it also has to deal with the Goa'uld, the Borg, and every single Doctor Who villain ever! Can't we get a break??!

Themes
One of the biggest themes in this movie is that there is more to life than what makes you successful. Doctor Strange finds his identity in his work. When he loses the use of his hands, he has no identity anymore. His whole life becomes a search for a way to get his hands back. Christine tells Strange that there is more to life, but he doesn't understand that until the end of the movie. I really like the ending scene of the movie because Strange lifts up his hands and they still shake. He has not fixed his disability, but he accepted it, and he has accepted that there are other paths in his life that branch off from the main one that he thought he would walk on forever.

Another theme is where power comes from and how one uses it. The sorcerers draw on power that lets them interact with different planes of existence, but there are some powers that have too dangerous of consequences to explore. One of these is the power of time, as contained in the Eye of Agamotto. Another of these is the power contained in the Dark Dimension. Still, the Ancient One uses power from the Dark Dimension to keep herself alive so that she can do good throughout the centuries. Doctor Strange uses power from the Eye of Agamotto to save the earth. The use of both of these powers is forbidden, yet good characters use it for good purposes. This raises the question do the ends justify the means? If someone is using prohibited power for good, does that make the power good? How much of this power can be used before it corrupts someone?
Marvel often poses questions of morality and power in their movies, and I love it. Such questions are fascinating to contemplate.

Two other themes that I noticed were science vs. belief (when Doctor Strange first comes to Kamar-Taj) and taking lives vs. saving lives (Doctor Strange, as a doctor, has taken the Hippocratic Oath—has this changed into a Hypocritical Oath now that he is fighting and killing villains?).

Humor
Finally, I want to say a note about the humor in this film. Marvel's humor is great and although it is subtler in this movie than in previous movies, it is still there. One of my favorite moments is when Wong's stolidity is finally broken and he bursts into laughter after Doctor Strange defeats Dormammu. My other favorite moment is this exchange: 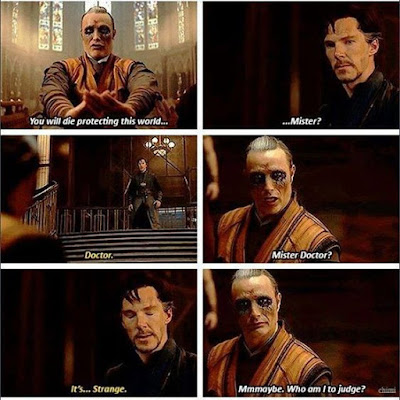 Finally, a disclaimer: there is some language in this movie and an allusion to characters sleeping together. Additionally, there is some mystical/psychedelic stuff that some people may not like. Otherwise, Doctor Strange is a pretty clean movie (besides some intense scenes, that is).

This may be my favorite Marvel movie yet! (Though I do love the Thor movies... Speaking of which, I can't WAIT for Thor: Ragnarok!)

Have you seen Doctor Strange? What did you think?
Posted by Abbey Stellingwerff