The time has come for you to find out the top five nominations for the Most Epic Hero Silmaril. There were seventy-five nominations! Now, as I hope you've gathered, Silmarils are pretty spectacular things. They were, after all, crafted by a Child of Iluvatar.
I won't keep you waiting on the edge of your chair any longer; here are the top five most-seconded heroes:

Westley from The Princess Bride- He's handsome (what with his eyes the color of the sea before a storm). He's strong (what with beating a giant in a wrestling match). He's a hard worker (what with being a farm hand for so long). He's an excellent swordsman (what with besting the most talented swordsman in the world). He's a smooth-talker (what with talking his way out of a death sentence). He's loyal (what with coming back from the dead—twice—to rescue the woman he loves). He is deserving of the Silmaril for Most Epic Hero.

Carswell Thorne from The Lunar Chronicles- Although Captain Carswell Thorne could be considered a criminal, he is also sweet and protective. He, too, is handsome, with bright blue eyes. He is loyal, protective, and funny. His quick wit lightens many a dark mood. He is deserving of the Silmaril for Most Epic Hero.

Janner Igiby from The Wingfeather Saga- Janner Igiby is a loyal twelve-year-old, who's had the task of helping look after his small family after his father died. Brave, but not above getting into many scrapes with his younger brother, Tink, Janner may be underestimated for his age. But it's the heart of the hero, and not the size, that really counts. He is deserving of the Silmaril for Most Epic Hero.

Artham Wingfeather from The Wingfeather Saga- Artham is half man, half hawk, and extremely devoted to his task of protecting the High King of Anneria and his siblings. Nothing is going to stop him from always being by their side - and anything that tries to get in his way had better look out. He is deserving of the Silmaril for Most Epic Hero.

Peter from The Chronicles of Narnia- There is no one more deserving of a Silmaril than a High King, and Peter Pevensie happens to be one. Peter, as the oldest Pevensie sibling, is a nice balance of whimsical and grown up. He takes care of his younger siblings, but he is also willing to have tea with talking beavers and play a game of hide 'n seek. He is defensive of Lucy's imagination when Edmund teases her for believing in Narnia, but he is also willing to forgive Edmund after Edmund betrays Aslan to the White Witch. He is deserving of the Silmaril for Most Epic Hero.

(Much thanks to Savannah for the descriptions of Janner and Artham.)

You will be able to vote for your favorite characters in the voting form at the end of this post, but before you scurry off to do that, I have two exciting announcements.
First of all, Faith T has won the giveaway of Where Carpets Fly and a King's Warrior bookmark! Congratulations! Jenelle either has or will shortly email you the details about what you've won.
Second of all, if you are bummed out about not winning the giveaway, do not fret, for there is a second giveaway! Yesirry, YOU could be the proud owner of this fabulous Grand Prize: 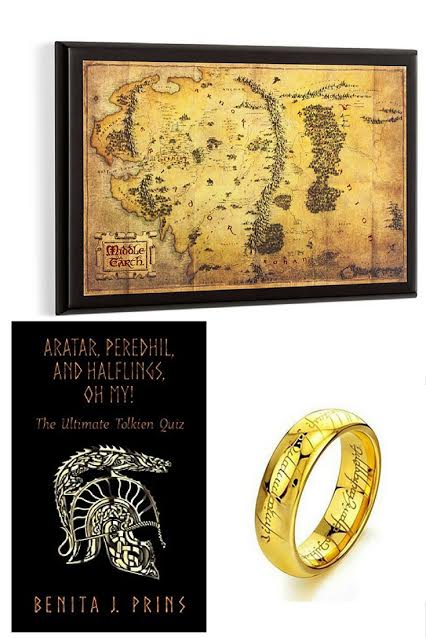 Contains...
-One map of Middle-Earth.
-One copy of Aratar, Peredhil, and Halflings. Oh My! The Ultimate Tolkien Quiz by Benita J. Prins.
-One ring to rule them all (WARNING: Ring not meant for taking over the world. Ring also not meant for journeying to the nearest volcano so you can throw it to its doom.)

How can you win this grand prize? Well, somewhere in this blog post is hidden one line of a ten-line poem. Each of the other nine bloggers hosting the Silmarillion Awards also has one line of the poem included in their voting post. Each line of the poem is a link to the blog post with the next line of the poem. There is a place on the voting form to enter in all ten lines of the poem, which will enter you in the drawing for the Grand Prize!

And now, the voting form (which is the same on every blog, so if you've voted on another blog, then you should be good!):

Return on July 20 when a special guest will presenting the winner with the Silmaril for Most Epic Hero!
Posted by Abbey Stellingwerff