Madeline J. Rose created a tag and tagged me! This is going to be a fun one, folks. 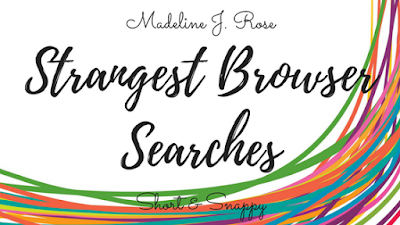 The rules:
-Access to your browser history and look through it.
-Pick at least 5 of your strangest searches you’ve had to look up as a writer.
-List them below with a short explanation as to why exactly you had to look them up.
-Tag 2-5 other bloggers.

1. "stab wound scar"
Google Images greeted me with some grisly pictures after searching this. I think I was researching scars because one of the characters in my fantasy novel has one and I wanted to make sure I was describing it correctly. Around this time, I also looked up "how do scars work" and "keloid scar" (which is a type of scar that grows on top of the injury. They are firm, rubbery, and raised).

2. "furious violin piece." And when this yielded unsatisfactory answers... "violin music angry"
Unsurprisingly, this was for a short story I wrote about a musician. He gets angry at his mom, grabs his violin, and goes outside to play away his frustration. I ended up choosing "Summer" from The Four Seasons by Antonio Vivaldi because I was already familiar with it.
Also searched for this short story: "saint-saens pronunciations," "shag carpet 80s," "how do middle school orchestras work," and "black silk dress."

3. "beauty pageants in ancient greece"
Apparently, they were called "kallisteia." I may or may not have been researching this for a retelling of Snow White which I may or may not be writing in the next few months.

4. "how to tar a road/what is the machine that tars a road called"
I never found out the answer to this and had to use a different metaphor for my story. If anyone knows what these machines are called, please let me know!

I tag:
Jack Lewis Baillot
Kendra E. Ardnek
Zachary Totah
DJ Edwardson
and anyone else who wants to do the tag!