Summer is over, and I am back at school. I had a lot of goals for myself this summer, and I completed a lot of them! Today, I thought I'd share them with you. 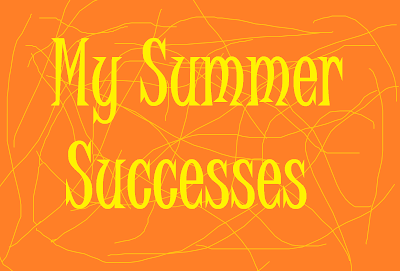 I got out of school in mid-May. Almost immediately, I started searching for a job. I didn't want to work for my previous boss because I needed more hours than he could give me. I also wanted something with more human interaction as picking up trash in industrial parking lots is a solitary job. Well, I traded out a job with no human interaction to a job with constant human interaction. A hardware store hired me as a cashier.

I enjoyed my summer job a lot! At least, for the most part. This particular hardware store has been in my city for ninety years, which means that it feels like you have just stumbled upon a gathering of your great-uncles who grew up on the farm and, therefore, know everything about nuts, bolts, watering systems, tools, paint, plumbing, and electrical, and don't mind talking about it.
This kind of "Mom and Pop" atmosphere draws an... interesting crowd to the store. I helped contractors who were only interested in getting the tools for their current job. I helped little old ladies who only wanted to buy plants. I helped Asians intent on making sure each and every price was right. I helped Hispanics who were always ready to smile and talk with me. I helped people who clearly had never been in a hardware store and were only there to buy one thing and then leave as quickly as possible. I helped long term customers who sang the praises of the store. And then I helped people like Dean. Dean—and other old men like him—were always ready to flirt with me and the other young, beautiful cashiers.

I worked approximately 340 hours this summer (72 of those hours in the last week of work, hence the lack of a blog post a few weeks ago), and I learned a lot about people. I have a deeper well to draw upon when I'm creating characters, that's for sure!

From the time school ended to now, I read twenty books. Nearly all of them were middle grade/YA books with a few nonfiction thrown in. I read the Chrestomanci series by Diana Wynne Jones and The Raven Cycle by Maggie Stiefvater. I also read a bunch of standalones. Stay tuned for more on them in my summer reading list wrap-up post!

One of my summer goals was to finish the fourth draft of my fantasy-fairytale novel by June 1, which I did. You can read more about that in this post. I'm excited to begin draft five, especially since in my last blog post I announced that I am going to publish this book next summer! But, more on that in my next post.
In addition to completing the fourth draft of my book, I wrote approximately 20,000 new words. This includes five short stories and a blog post nearly every week. I participated in The Silmarillion Awards again this year, which was SO much fun!

I had a birthday. I'm twenty-one now! Which means that I am legal to do almost anything except run for national government.
I also did a bunch of Fun Things like climbing a mountain (albeit a small mountain, but a mountain nonetheless), canoeing with my dad and uncles and cousin, waking up at 4:00AM to catch a ferry so that I could spend thirty hours with my friends in one of my favorite places on earth, and exploring a stream with one of my best friends.

It's been a good summer! I'm excited to be back at school, though. I've missed learning, and I've missed my friends. I can't wait to see what adventures the next academic year holds.
Posted by Abbey Stellingwerff

Email ThisBlogThis!Share to TwitterShare to FacebookShare to Pinterest
Labels: update