Hi, guys. We are three weeks into NaNoWriMo, and I started my novel over again.

Last time on Adventures with Abbey, I decided to focus on characters rather than plot and write from Varina's point-of-view.
Something was still wrong, though. I started in medias res, which means in the middle of things, but this didn't give any context to my characters, their goals, or their motivations. I didn't feel any connection to Varina because I didn't have time to develop her before I threw her into a plane crash. I felt even less connection to Daniel because I wasn't writing from his point-of-view.
Even though I am trying to write a character driven story, I didn't feel like there was enough of a plot to support the characters. Daniel and Varina were on their way to a conference when their plane crashes. Varina decides to kidnap Daniel when she learns that he is the son of the man whom her father used to work for because she thinks that Daniel has information about her father's death.
By starting here in the storyline, I felt like I couldn't go anywhere.

So I started over. 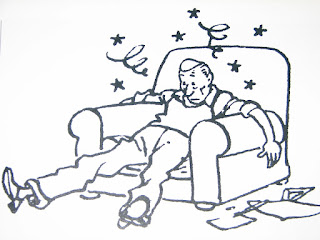 I rearranged the events of the story, such as the conference and the plane crash, so that the novel begins earlier in the storyline. This allows the audience to meet, and become comfortable with, Daniel and Varina before they are thrown into a dangerous situation. I also switched back to third person.
They say third time's the charm, and I can agree: this new beginning is going the smoothest of the three. I know my characters better, and I know where they are going in the plot.

The moral of the story is that sometimes the pacing of your story is off. Sometimes you need to restart. Twice. Sometimes in medias res does not work and you have to start earlier in the timeline. And that's okay.

Has this every happened to you guys? Have you ever had to start a project over and over and over again until you finally found the right beginning? Let me know!
Posted by Abbey Stellingwerff 4 comments:

The Truth About my NaNoWriMo Novel

Plot
My original plot for this Camp NaNo centered on Varina: her father has been murdered and she wants to find out whodunnit. As she searches for clues, she meets Daniel, a wannabe pianist held back by controlling parents. I was scared about this because I have always written plot-driven novels, and this idea didn't seem like it could support 50,000 words of story unless it was a thriller, which I didn't want to write.

I decided to make the story character-driven and hoped that the plot would follow. But then I had an idea in the shower... and my novel changed into a plot-driven, magical realism complete with Bigfoots and an intricate plot. A week later, I am kicking myself for letting familiarity woo me away from trying something new. I'm also not sure I like the magical realism twist. Daniel and Varina's characters are meant to be in the real world, I think.

Characters
I did extensive character profiles on Daniel and Varina before I started to write, but they are not coming off like I had hoped. Daniel is needy and privileged, but he lacks the charisma that is supposed to draw Varina and readers (and me!) to him. Varina is supposed to be angry and logical, but she is not supposed to have a compassion deficiency! I don't like either of them, which means that you won't either. They don't like each other either, which is problem if they are to become best friends later.

I'm also not sure who is supposed to be telling this story. I started by alternating between Daniel and Varina's point-of-view, but something was off, so I tried doing first person from Daniel's perspective. I haven't written much in first person, so I quickly reverted to third person without realizing it. This was the second new thing I tried that didn't work because I didn't put in the effort of trying something new.
A wise woman once said, "Take chances, make mistakes, get messy!" but I don't like any of those things, so I stay where it's familiar and safe. Several areas of my life are impacted by this, but my creativity suffers the most.
Which is why I've decided to start Camp NaNorWriMo over. I am ditching the magical Bigfoots and going back to my original idea. I am going to write in first person from Varina's point-of-view. I am also going to keep the 15,000 words that I've already written.

Oh, and guess what? My Camp NaNoWriMo novel does not have a title! I know, I know, you are all shocked, but perhaps you can understand that not every novel I write can have such a brilliant title as "Unnamed Fantasy Novel." That title took all of my creativity so that, four years later, I still can't come up with anything as clever.

Let's get a conversation started in the comments! Do you tend to write all of your stories in the same style? Do you think there is benefit to trying different styles? Am I insane for starting this story over again?
Posted by Abbey Stellingwerff 6 comments: