I've been playing board games for nearly as long as I've been telling stories. Of course, when I was young, the only games I played were Mastermind, Rack-o, The Game of Life, Sorry!, Rat-a-Tat Cat, Slamwich, Labyrinth, and other children's games. As I got older, however, my dad introduced strategy games to me. He started me off easy with Carcassonne and Lost Cities. I'm sure we must have played Settlers of Catan at some point, too. Eventually we moved on to Robo Rally, Thebes, Lord of the Rings, and Ticket to Ride. These led to Alien Frontiers, Defenders of the Realm, Dominion, Railways of the World, San Juan, Imperial Settlers, and many, many more games! I started attending the board game group that meets at our church every month and have even gone to two board game retreats held by a nearby Christian Bible camp.
One of these retreats was the first weekend in April. It was fun and relaxing, so I thought I'd share with you the board games that I played: 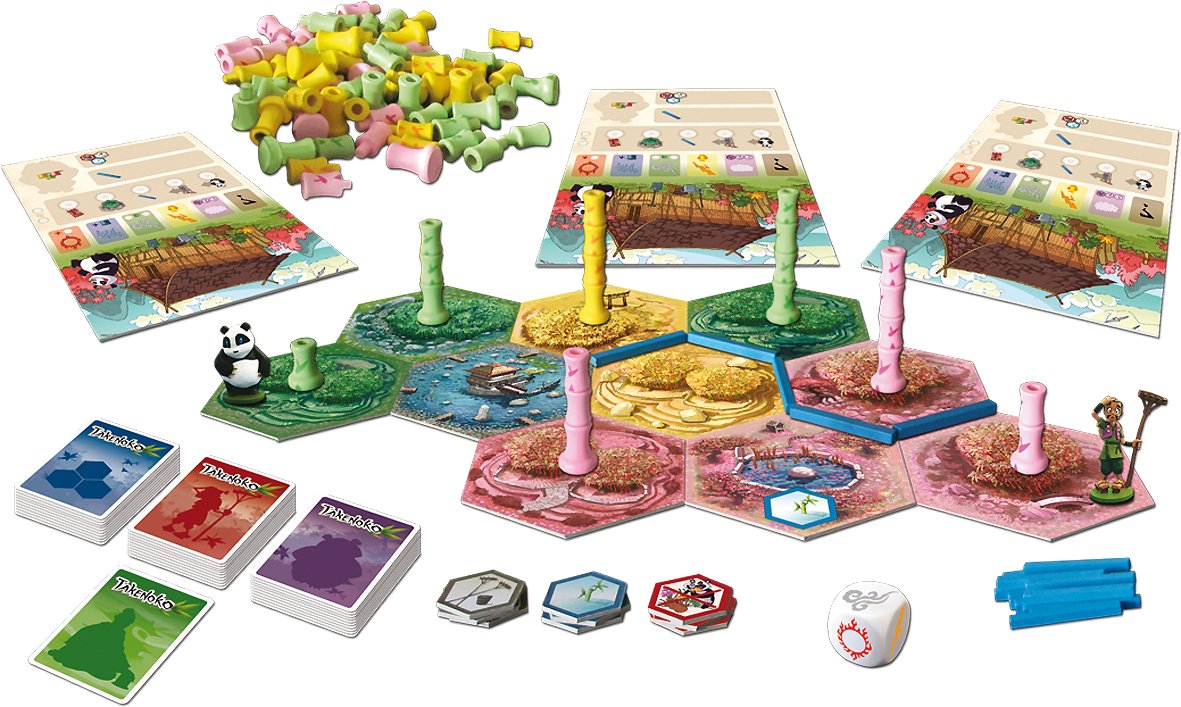 In this game, you try to build and irrigate gardens and build and eat bamboo to match whichever pattern is on your cards. If you complete a pattern (such as eating one piece of bamboo of each color, or building a bamboo stalk four pieces tall on an irrigated location), you get however many victory points are on that card. The first player to complete eight cards triggers end game and whoever has the most points wins.
This is a fun, easy-to-understand game that takes about an hour to play. Plus, it has gorgeous artwork and a cool theme!


Carcassonne is a tile-laying game. Players take turns pulling tiles from a bag to make cities, roads, and cloisters, which, in turn, give them points when completed. It's fun to see what kind strange-shaped cities or useless roads players come up with! This is another easy-to-understand game that takes about and hour-and-a-half to play. It's one of my favorites (though I prefer the old artwork to the new design).

Catan is one of the Elders of the strategy board game community. Often, if someone has played a strategy game, that strategy game was Settlers of Catan. In this game, you must build roads, settlements, and cities for points. You build these institutions by paying with resource cards, which you gain depending on dice rolls and which hexagons you are built around.
Catan, like Takenoko and Carcassonne, is an easier, shorter strategy game. And, if you don't like the theme of the game, there is a Star Trek version that plays just the same, only in space.

This board game is an adventure cooperative game. You are your fellow players have survived a shipwreck and have managed to swim to a desert island. Now, you must work together to scavenge for food, supplies, and enough wood to make a signal fire for rescuers to see. But, watch out for the dangers of the forest, wild animals, and the weather!
Robinson Crusoe is a higher strategy game that takes more than two hours to play (unless you die early). I love the theme of this game (Muppet Treasure Island having given me a taste for island adventures at a young age) and the variety of actions you can take. However, it did take a long time to set up, and, because this was my first time playing, I didn't know exactly what I was doing and which actions were the most important. Thankfully, we had a good teacher playing with us and we ended up getting rescued in the end! It was a fun game. 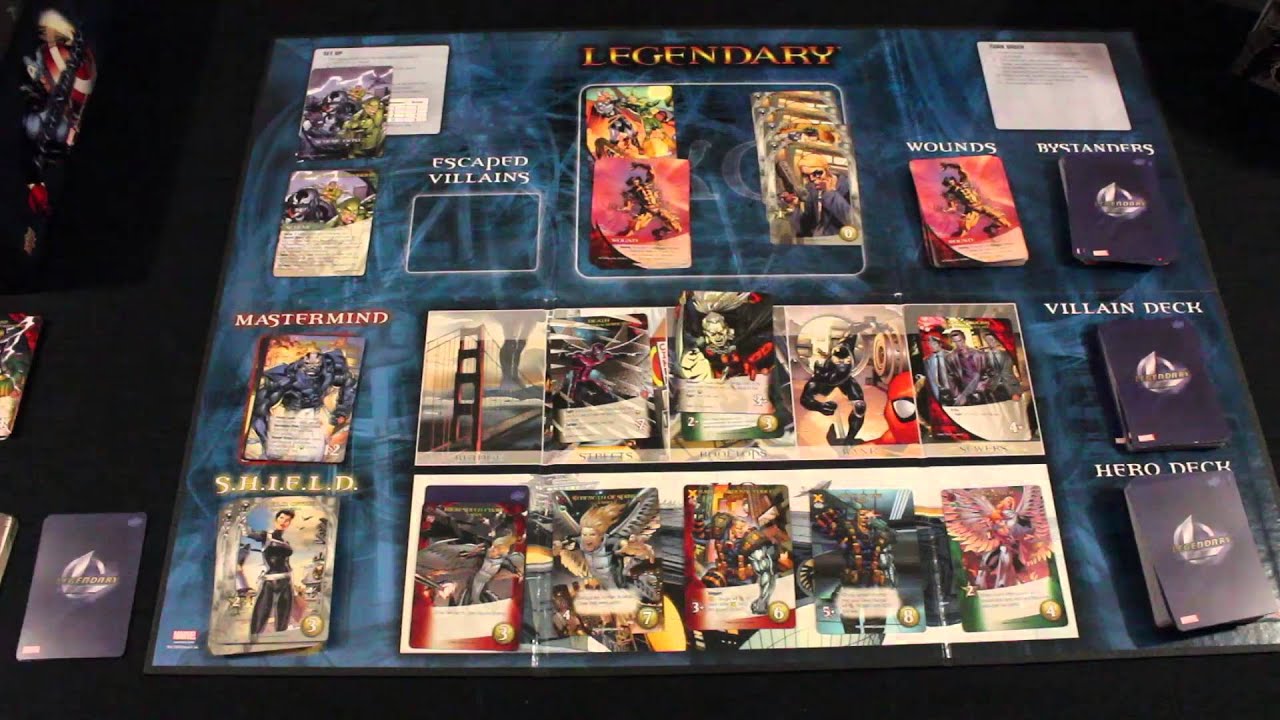 Legendary is a cooperative deck-building game where you have to recruit superheroes from the hero deck to defeat villains who are rampaging the city. In addition, there is a mastermind criminal that has to be defeated several times in order to win the game. But, be careful! If too many villains escape the villain track with eight innocent bystanders or if the villain deck runs out before you defeat the mastermind, you lose.
If you've ever played Dominion or Thunderstone, this is like those two games mashed together with a superhero theme. I saw Wil Wheaton play this game on Tabletop and, since I like deck building games and Marvel, I thought it would be fun to try! It was really fun! We love playing Dominion with my cousin, but I think I might like this game slightly better. I love the added element of having to destroy bad guys before they destroy you. It makes the gameplay more dangerous. Plus, each villain has victory points on it so at the end you can see which person came away from the battle with the most glory. Guillotine is a fun "filler game." Every turn, you take the French aristocrat at the front of the line (to get their heads chopped off) into your victory point pile. As you can see above, some aristocrats, like King Louis XVI, have more points than others. Some have negative points. Every turn, you can play an action card from your hand. Some of these cards let you rearrange the line so that you can get an aristocrat with a better point value. Other cards give you additional points if you meet the requirements.

This game is based off of Terry Pratchett's Discworld novels. Everybody gets a secret objective, such as controlling x amount of areas, or earning $50. If you achieve your objective, you win. If no one achieves their objective and both card decks are depleted, the person with the most points (each person and building has points) wins. Every turn, you play actions (like playing people or building buildings) that help you achieve your objective.
I thought this was a really fun game! I think every person on each card is a character from the books. Since I just started reading the first Discworld novel, I recognized one or two of the names. It would be fun to read the entire series (or some of it, at least. It does have forty-one books) and then play this game again to see how many more references I can spot.

Isle of Skye has been described as Carcassonne, but better. Like Carcassonne, this is a tile-laying game. Each turn, players take three tiles out of a bag. One tile they get rid of, the other two they try and sell to the other players. When each player has bought a tile, they add that tile to their home base. The goal is to build the area around your home base to reflect the scoring tile for that round. There are about thirty tiles with different ways to score, but each game is played with only four. Scoring tiles include things like how many boats and lighthouses are in an enclosed lake together, or how many sheep each player has, or how many barns each player has. After five rounds, the player with the most points wins! It's a little hard to understand, but very fun.

What kind of board games do you like playing?

(DISCLAIMER: I found all the pictures, except the one of Carcassonne, on Google Images. They belong to their respective owners and I'm not trying to steal them or claim them as my own.)
Posted by Abbey Stellingwerff

Email ThisBlogThis!Share to TwitterShare to FacebookShare to Pinterest
Labels: board games