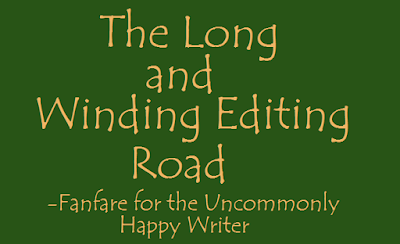 Usually, when you come across writers, they are sullen with a far away look in their eyes, contemplating wayward characters and gaping plot holes.
But, hark, do you hear the resounding BOOM of drums? The clash of the gong? Do you hear the lone trumpet line swell as French horns, trombones, and other brass join the fanfare? They play a fanfare for an uncommonly happy writer. An uncommonly happy writer named Abbey.
Why this fanfare, you may ask?
Because I finished the third draft of my fantasy novel!


I expected the final third of my novel to be the hardest to edit due to the character that I was taking out, but, I was enjoying the story so much that I finished the last twenty-one chapters in five days. The last thirteen chapters I finished yesterday by staying up past midnight. Please don't let me do that ever again.

The character I removed didn't end up being as difficult to delete as I had anticipated. Most of his scenes were in big blocks of text so I could highlight them and press the backspace key. All of his important dialogue I was able to delegate to other characters.

Now, I am going to take a month-and-a-half off from this story while I let some friends read it. What am I going to do while my book is away? Several things:

1. Read a lot. I have three books out of the library that have to be returned soon. Hopefully, I'll be able to speed through them now that I'm not consumed with editing.
Also, I'm still making my way through The Silmarillion and enjoying it very much. I just started Beren and Luthien's tale. Did you know that when Thingol accuses Beren for entering his land and falling in love with his daughter, Beren holds up a ring with two serpents with emerald eyes as protection? This ring is, in fact, the same ring that Aragorn owns in The Lord of the Rings! It passed from Beren through the generations until it reached Aragorn.

2. I might outline a few short stories. I was going to save this project for the summer, but these stories have been nagging for my attention. Who will win: Abbey's schedule or the plot bunnies? Find out during our next WWE (Weird Writers Entertainment) match!

4. Writing blog posts. There are several exciting things coming to the blog in the next few months (unfortunately, a WWE match is probably not among them), so stay tuned!

5. Probably watch some Star Trek. Does it count as research if I'm drawing inspiration from it for one of my plot bunnies?

The brass play a final triumphant note. The drums fade into the distance. The fanfare ends.
Posted by Abbey Stellingwerff