The Long and Winding Editing Road—Movin' Right Along 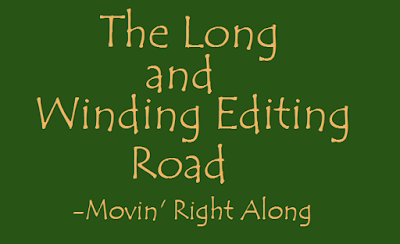 In my last editing post I talked about the struggles that my main character, Finn, has been giving me. I was trying decide if I wanted to go back to the beginning and fix his character, or if I wanted to continue editing from where I was.
I decided to go back to the beginning and fix him. I only looked at the chapters that feature his point-of-view. It was interesting to focus so intensely on one character for one week, ignoring everything else in the story. I found that, by focusing on Finn, I got a much better view of his character arc as a whole. Because I had so recently read where he was at the beginning of the book, I could easily pick out discrepancies and character growth. In the end, I was able to move through Finn's chapters quickly and fix him to the best of my abilities at the moment.

Now, I'm moving into the final third of the third draft. This is going to be the hardest third of the novel. The last few chapters have only been through one draft because I didn't write the ending during the first draft. And, I've decided to get rid of a character that joins my characters on their quest in the final third. He's been in the plan for the story longer than Timone (Timone is the one who showed up randomly halfway through the book). I named this character after two special someone's. It's going to be sad to cut him out of all but one chapter. It's going to be hard, too. It's going to be hard to delegate his lines and his actions to the others. Yet, I know I'm doing the right thing. This character has no purpose in the narrative. I can't think of a single reason to keep him around because he adds nothing to the plot. So, as sad and as hard as it is to let him go, I have to do it. And he won't be gone forever. He'll still have a significant informational role in Chapter 39. Maybe I can transfer him to another story in the future.

Have you writers ever had to take out a deadweight character from your novels?
Posted by Abbey Stellingwerff