Let's talk about The Silmarillion

Whenever The Silmarillion is mentioned, eyes widen, heads shake, and hands outstretch in a protective manner. The bodies that the hands belong to step backwards; mouths protest, stammering how hard J.R.R. Tolkien's history of Middle Earth is to read. Indeed, when my dad tried to read me The Silmarillion when I was about thirteen, I was so bored that I couldn't concentrate on what he was saying. We had to stop.
But, six years later, I can proudly say that I have conquered the beast! And, you know what? It wasn't so beastly after all. I read The Silmarillion, and I liked it. In fact, I enjoyed it so much, that I am going to talk to you about it for a whole blog post. If you like, you can talk back at me in the comments. I would love to hear your thoughts on this book!

The Silmarillion, as you may know, tells the history of the Elves in Middle Earth. The book is split into five parts. (Forgive me if I don't put the dots and dashes above the vowels that should have them; I don't know how to do that.)

Ainulindale
Iluvatar makes the Ainur—which are made up of the Valar and their lesser counterparts, the Maiar—and the Ainur begin singing a beautiful, harmonious song. One Ainur, however, named Morgoth, tries to hijack the music by singing discordantly. He eventually has a sing-off with Iluvatar and is stopped. The music that the remaining Ainur sing creates Arda, or, Middle Earth, where Iluvatar has plans to place Elves and men.

This was, perhaps, my favorite part of the book. There are clear parallels between Middle Earth's creation and our own world's creation as set forth in the Bible. As a musician, I loved that Middle Earth was created through song, but that evil Morgoth tried to take over by creating discord... literally. What a brilliant idea! It turns a hard-to-understand concept (good vs. evil) into something that can be understood by anyone, for discord naturally creates tension in music that even non-musicians can feel.

Valaquenta
In the second part of The Silmarillion, we learn the names of the Valar. We also learn more about Morgoth—he wants to be the sole possessor of light, but, since he cannot, he turns to evil and darkness. He corrupts other Ainur, including a Maiar named Sauron.

I found this section very confusing as we are introduced to over fourteen characters who each have two names. Actually, that is my only major complaint for the whole book. There are so many characters, which is fine, because this is a history; but do they ALL have to have two names?

Feanor, an elf, contains the light of the two trees in three Silmarils. The Silmarils were the fairest jewels in the world. Over the next few hundred years, many battles are fought over the Silmarils until two are lost forever and the third is placed in the sky as a star.

Quenta Silmarillion is the longest section in the book. It is composed of twenty-four chapters and tells the history of the Silmarils, of the elves, and of Morgoth's rise and demise. I loved the clear line between good and evil. I loved how Tolkien showed how one, tiny seed of evil, planted by Morgoth in a good character, could twist a person and make them do the will of Morgoth (who is also called Melkor) without even realizing it.
I came across many Biblical parallels, though I'm not sure if they were intentional or not. For example, the Numenoreans reminded me of the kings in the Old Testament—they started out as followers of God, but, as generations passed, they were tempted by evil and turned away from the Lord.

Akallabeth: The Downfall of Numenor
After learning about the elves from Quenta Silmarillion, we learn the history of men in this section; specifically, the Numenoreans, who are also called the Dunedain. We learn about their kingdom of splendor that eventually falls under the corruption of Sauron. We learn that a remnant faithful to Iluvatar escapes the island of Numenor and travels to Middle Earth where they set up the kingdom of Gondor.

Of the Rings of Power and the Third Age
In the final section of The Silmarillion, Sauron corrupts both men and elves. He teaches the elves how to make rings of power, but when they put on their rings, they find that they are directly connected to Sauron's One Ring. Over time, many of the rings of power come into Sauron's possession. He gives seven of them to the dwarves and nine of them to men. As Sauron continues to rise in power, several Istari (which are Maiar in the form of men)—including Gandalf, Radagast, and Saruman—are sent to Middle Earth to help fight the powers of evil.

There is a lot of great information in this section regarding Gandalf's role in Middle Earth before and during The Hobbit. Also, it's fascinating to learn the history of the rings of power. That's one of the best things about The Silmarillion: you get to learn the history behind things only hinted at in The Hobbit and The Lord of the Rings. 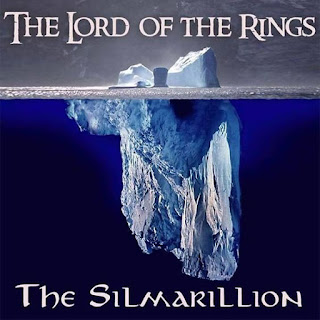 One of my favorite things about The Silmarillion was its epicness. Many people are probably intimidated by the language of the book—Tolkien wrote The Silmarillion primarily in highly detailed prose; there is very little dialogue—but I loved it. Even though the book is not written in verse, it made me believe I was reading an epic like Beowulf or The Faerie Queene.
And what does every epic have in addition to amazing language? Amazing characters! Like I said, there are many characters in The Silmarillion. There are brave action heroes, wise teachers, beautiful ladies, evil double-crossers, and a lot of terribly sad tales.
In the back of my book, there were family trees and an index of names to help me keep everyone straight. It's fun to study these resources and see how this character is related to that character. 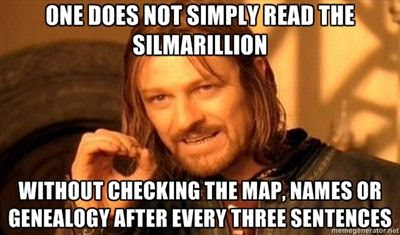 For example, did you know that Elrond and Aragorn are distantly related? Because Elrond and his brother Elros were half-human and half-elf, they were allowed to choose whether they wanted immortal life like the elves, or mortal life, like men. While Elrond chose immortal life, Elros choose the mortal life of man and, through his line, came the race of Numenoreans and, eventually, Aragorn.

I'm already anticipating when I can re-read The Silmarillion. I think I will have to read it at least twice more to glean the entire story. For now, I will start reading The Hobbit and continue listening to the "Nightfall in Middle Earth" album by Blind Guardian over and over again (Blind Guardian is a heavy metal band who created an entire album based off of The Silmarillion. My favorite song is "Time Stands Still (On the Iron Hill)," which is about Fingolfin's single combat with Morgoth).
I'm also going to start preparing for The Silmarillion Awards.
What are the Silmarillion Awards? you may ask.
The Silmarillion Awards are like the Oscars, except instead of being broadcast on television, they will be held on some of your favorite blogs (including mine), and instead of being for all genres, the prizes are specifically for fantasy characters.
Stay tuned for more information!

Have you ever read The Silmarillion? What did you think of it?
Posted by Abbey Stellingwerff