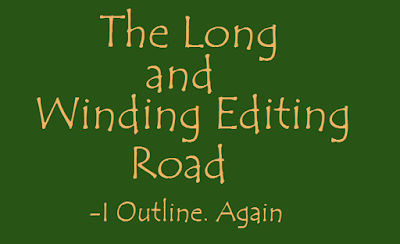 My biggest goal for 2017 is to finish my fantasy novel by December 31st. I have been working on it for over three years now, and I am ready to move on to other stories.

Over Christmas break, I began working on the fourth draft of The Novel. Because of school, I didn't have a chance to work on it again until Spring Break.
For the first draft of this novel I didn't have an outline, but when I wrote the second draft I outlined so that I knew where to go. Thoughts of readers and thoughts of my own have made me drastically change a lot of things, so, over Spring Break, I realized that I needed to outline. Again.

Before I began outlining, however, I decided to write out all of the major, medium, and minor plots in my novel so that I could include them in the outline and see which plots were being advanced in each chapter.
My four major plots are the main storylines of the novel. I have twelve medium plots that mostly have to do with relationships between characters. For example, one of my medium plots is the strained relationship between Finn and Timone. I have twenty-one minor plots that mostly have to do with minor characters' relationships with each other or character details that I don't want to forget, such as Rozella's relationship with her brother or her claustrophobia.

As I outlined, it was SO helpful to have the list of plots next to me because I could insert medium or minor plot details into chapters that were otherwise lacking depth. Also, I could take out scenes that didn't fit with a plotline. There was one scene where Rozella is sad, so she is hiding under her bed, but I realized that if she is claustrophobic, she won't want to hide in an enclosed space; in the next draft, I will have her walk in the forest when she is feeling sad.

Since the first draft, I have been looking for ways to condense my story. Draft One was over sixty chapters long, and I hadn't even finished it yet! Draft Three was fifty-nine chapters, but during outlining, I condensed it down to fifty-three chapters. This left plenty of room to add several insert chapters that show what the human kingdom is doing while the main characters are on their quest. This will bring the major plotlines of my story together so that it isn't so choppy.

Here is my new outline (the inserted chapters are turned sideways): 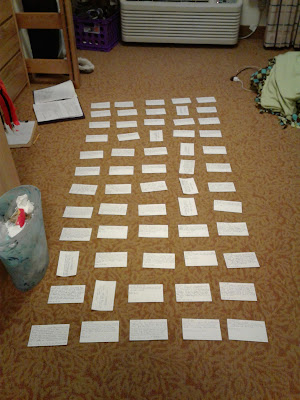 I feel really, really good about the changes that I am making, and I can't wait to start writing again! If I do one chapter every day, I should be done by June 1, which is my goal. If I can complete Draft Four by June 1, then I can send it to some readers over the summer. Then, in the fall and winter I can fix any (hopefully minor!) problems that they find, fix grammar and syntax, and then mark the book with a big "THE END."
Posted by Abbey Stellingwerff