The Life of Our Lord by Charles Dickens

"My Dear Children, I am very anxious that you should know something about the History of Jesus Christ. For everybody ought to know about Him."
So begins Charles Dickens' least-known work. 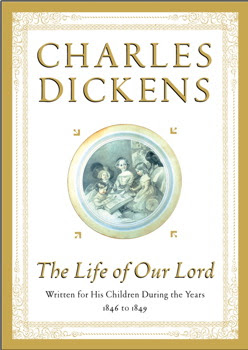 In this little volume, Charles Dickens tells the story of Jesus' life and ministry in his own words. He intended this book to be for his children and only his children, so it was never published until eighty years after it was written, when his family decided to publish it. Even so, many people do not know about this book.
I found out about it because Charles Dickens' great-great grandson gave a chapel at my school (which I found out about after the fact, unfortunately) where he talked about this book. He is in Minneapolis for several weeks acting in a one-man play based on the writing of the The Life of Our Lord, and I was able to go! 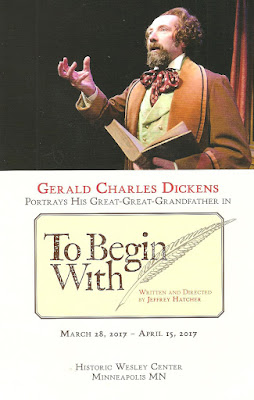 It was a fabulous play. Gerald Dickens is an amazing actor. He used many voices to portray the different characters in the play (it was rather like Charles Dickens was telling us, the audience, a bedtime story). This play was especially meaningful for me as I went to see it during Holy Week. There is a part where Dickens is recreating the scene of his cross (for he has got it into his head that he will act out the live of Christ for his children) that pierced my heart. After that scene, he reminds us that light comes after darkness, that resurrection comes after crucifixion, and that redemption comes after condemnation.
After the play, I got to meet Mr. Dickens and he signed my copy of The Life of Our Lord (graciously given me by my friend Joseph). 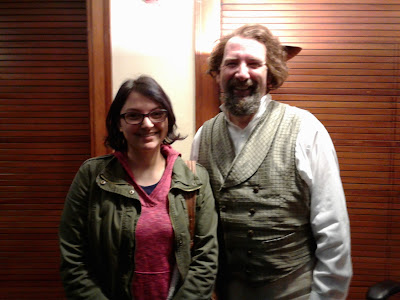 Wow! What an opportunity! It's not every day that you get to meet the great-great grandson of one of the best authors in history! I asked him whether or not there was a lot of pressure growing up with the last name "Dickens," and he said, "No. My father was good about that and told us to do whatever we wanted." So, he became an actor. (He also has a travel blog about his acting tours.)

I was struck by both the play and the book by the legacy of faith which Charles Dickens left to his descendants. He wanted his kids to know the story of Jesus Christ and, here, several generations and over 100 years later, his great-great grandson is still sharing that story with the world!

Here is what I thought of the book:

Stylistically, The Life of Our Lord reads like a fairytale, which is good as it is for children. It does not, however, make the story of Jesus out to be a fairytale. Dickens was careful to make sure that his children knew that.
Throughout the book, he explained terms like "trespasses" and "synagogue" so that his children would understand, which I enjoyed. I even learned a new vocabulary word from this book! Ever since I was a child, I have heard the word "prodigal" and the word "son" and assumed that "prodigal" must mean "returning" or something of that sort, as that is what the son does in the story. Alack! no! It means "extravagant" or "wasteful." Of course, I took to Twitter to proclaim this discovery.

Dickens emphasized Jesus' purpose to do good rather than to save humanity from their sins. Because of this, he included several moral lessons for his children within the narrative of Jesus' life. Here were two of my favorites:

"He chose [his disciples] from among poor men, in order that the poor might know...that Heaven was made for them as well as for the rich...Never forget this, when you are grown up. Never be proud or unkind, my dears, to any poor man, woman, or child. If they are bad, think that they would have been better if they had had kind friends, and good homes, and had been better taught."

"We learn from this that we must always forgive those who have done us any harm, when they come to us and say they are truly sorry for it. Even if they do not come and say so, we must still forgive them, and never hate them or be unkind to them, if we would hope that God will forgive us."

It bothered me that the book focused on doing good rather than salvation, but, at the same time, it made me think a lot. The simple way in which Dickens wrote about Jesus' ministry hit me in a way that the actual Gospels never have (although Dickens' book makes me want to go and read the New Testament now!).
Jesus spent his time with prostitutes, tax collectors, beggars, and seriously ill people. These are people that society tends to shy away from, and society includes Christians. We are called to help the poor and needy but when we are faced with someone in that condition we are more like the priest and the Levite than the Good Samaritan.
I know that I tend to be scared of these kinds of people because they are different than I am. I don't know how to act around them because I don't know how they will act around me, so I tend to stay away from them.
What a horrible reason not to help those in need!
Another horrible reason not to help those in need is that I get too wrapped up in myself and my friends to care about strangers. I think that myself and other Christians are too wrapped up in our own salvation to care about other people's salvation. We're supposed to "get right" with God before helping others, and getting right with God means searching ourselves for sin and fixing it; oh, and maybe perfecting our daily quiet time with God, too. It's not that these are bad things, but if we wait until we've "fixed" our sin to bring the hope of God to others, we'll never share the Gospel because we continually fall back into sin!
I think another reason that we don't share our salvation is because we are scared of rejection and hopeless for the world. The world is a scary place for a Christian to live in. We've been persecuted since the beginning, and, according to recent news, things aren't getting any better. I think we have accepted that the world is evil and that if we share our faith we will be persecuted, so we tell ourselves that it's hopeless and that the world won't listen anyway, so why even try?
It is not in our power to change the world, and it is not our job to change the world. It is, however, in God's power, and it is God's job. Our job is to follow Jesus' example. We are supposed to share our hope with the world. We are supposed to help the poor and those in need. It is God's job to do the rest.

Dickens had something to say about this, too: "[Jesus taught] them to go forth into the world, and preach His gospel and religion: not minding what wicked men might do to them."
Posted by Abbey Stellingwerff