And the Most Nefarious Villain Award Goes To... 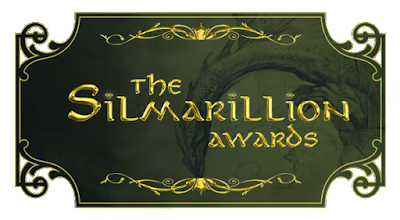 The stage is dark. Two figures stumble up the steps. As they struggle on stage, a single spot light turns on and illuminates the two figures. One is small and spider-like with thin, spindly appendages. The other is tall and also thin, though he is stooped over with the weight of something he carries. Both blink in the bright light as they approach the podium awaiting them in the center of the stage. The tall man lugs his load onto a stand that would normally hold a globe, and then straightens in front of the podium. He wears all white. His long hair and beard are white as well. His companion, on the other hand, wears dark clothing and has no hair. He is also too short to reach the podium.
The white gentleman speaks. His voice is deep and smooth. He has the kind of voice that one could listen to for hours, regardless of what he says.
"May we have a stool for Gollum?" he asks.
"Yessss... a sstool, precious. We wants to see, we do," hisses the spidery creature.
A stage hand runs out from the wings of the stage with a stool for Gollum.
"We shall begin," says the man in white. "I am the wizard Saruman and this is my companion—"
"Gollum, precious. Gollum, Gollum."
"Yes, my companion Gollum. Today, we, along with Sauron—who will be Skyping in via Palantir shortly—have the privilege of presenting the Most Nefarious Villain Silmaril to the worthiest harbinger of evil in all of fantasy literature! ...besides ourselves."
The man in white falls silent, waiting for something. When the silence becomes awkward, he clears his throat and taps the round, black ball which sits in the globe holder. He taps it again and waits. Several more seconds pass. Suddenly, the ball is replaced by an orb of fire so bright that Saruman and Gollum look away.
"Thank you for joining us at last, Sauron," Saruman says in an annoyed tone as he blinks the light from his eyes.
The fiery orb's intensity lessens and reveals a piercing eye within. The eye is surrounded by a ring of fire which blazes brighter in response to Saruman.
"Shall we begin?" Saruman asks. He does not wait for his companions to answer, but instead opens a manila folder. "The nominees for the Most Nefarious Villain Silmaril are... The Dragon from the Tales of Goldstone Woods by Anne Elisabeth Stengl."
The audience claps.
"Lady Life-in-Death from the sssame... gollum, gollum," hisses Gollum.
Once again, the audience applauds.
"Princess Davira from the Ilyon Chronicles by Jaye L. Knight," Saruman says.
This time, the applause is accompanied by shouts of someone who is a little bit too enthusiastic about this nomination. Gollum hisses at the Ilyon Chronicles enthusiast before naming the next nominee.
"Doloresssss Umbridge from Harry Potter, precious."
No one applauds for this villain. Instead, she is booed. Someone even shouts, "Give her the award! She's worse than He-Who-Must-Not-Be-Named." Saruman glances sharply at the shouter and she settles in her seat with a sneer and a, "Well, she IS."
"Our final nominee is the White Witch from the Chronicles of Narnia by C.S. Lewis," finishes Saruman. "And the winner is..."
Saruman opens a second manila envelope. Gollum hops from one foot to the other in anticipation. The Great Eye of Sauron burns brighter.
"The White Witch from the Chronicles of Narnia."
The audiences erupts with clapping and shouting. The White Witch rises from her seat and ascends the steps to the stage. She is dressed in a silver gown with a dropped waist and a long train. The dress is covered in crystals so that the Witch looks like newly fallen snow in the dead of night.
Saruman waits for her to arrange her train before pulling the Silmaril from the folds of his cloak. 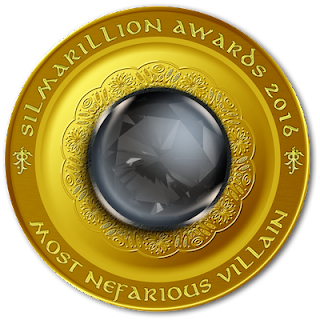 "Your Silmaril," he says, looking lustfully at the jewel.
"Thank you," says the White Witch.
Her lips curve upwards very slightly as she scrutinizes the Silmaril. As she reaches out to take it, however, Gollum pops up between Saruman and the Witch. He grabs the Silmaril and leaps off the stage with it.
"My precious! We wants it, we do! Preciousss!" he yells.
"Security!" Saruman shouts.
Sauron's eye grows wide, flaming white hot in anger.
"My Silmaril! No!" the Witch screeches. She wields her staff and aims it at the audience. "Bring that back you wretch, or I shall turn you to stone!"
"My preciousss!" "No, no, gollum... Mustn't steal, we mustn't. Bring back the precious." "Sssss! We keeps it, we will." "No, no! Brings it back, we will! Sméagol will bring back the precious!" "Sssss!"
Gollum races back up the steps and presents the Silmaril to the White Witch. She looks down her nose at Gollum and snatches the jewel from him.
"I will not recite a speech, for I have been greatly insulted," she says, turning up her nose at the creature groveling at her feet.
"Sorry, we are," says Gollum.
The White Witch does not acknowledge him but, instead, turns on her heel and walks off stage. As she reaches the bottom step, she fires her staff backwards at Gollum and he turns to stone.
"That concludes our ceremony for today," says Saruman. "Thank you for joining us in the first ever Silmarillion Awards. Refreshments will follow in the antechamber."
He follows the White Witch off stage and offers her his arm. She takes it and they lead the audience out of the auditorium.
The spotlight goes out, casting the stage into darkness once more. The only light comes from the Palantir, where the blaze of the Eye of Sauron dwindles to a blue flicker. Someone opens a stage door and a breeze blows through the wings and onto the stage. Whoosh; the Eye of Sauron is snuffed out.

Later, the janitor comes to mop the floor and trips over a stone statue in the middle of the stage.
"Who puts a statue in the middle of the floor, eh?" he grumbles to himself. "Now I'll hafta move it myself." He picks up the statue with a grunt and hauls it to the dumpster outside. He throws it in, but, as soon as he leaves, a Lord of the Rings enthusiast dumpster dives to save the lifelike statue of Gollum. It will definitely add value to his collection. What a find!

Thus ends the first award ceremony for the Most Nefarious Villain Silmaril.
Posted by Abbey Stellingwerff